Kennedy cousin Michael Skakel is going back to court this week in a bid for a new murder trial, adding yet another twist to a case that has spawned decades of intrigue. 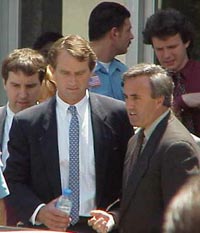 Skakel, a nephew of Ethel Kennedy, is serving 20 years to life in prison after he was convicted in 2002 of bludgeoning Martha Moxley to death with a golf club in their wealthy Greenwich neighborhood when they were 15.

Skakel, 47, is seeking a new trial based on a claim by one-time schoolmate Gitano "Tony" Bryant implicating two of his friends in Moxley's 1975 killing. He will appear in court starting Tuesday for the non-jury hearing in Stamford Superior Court that is expected to go on for one to two weeks.

Bryant, whose claim surfaced in 2003, said he was with two friends from New York in Greenwich the night Moxley was killed. According to court papers, Bryant said one friend had met Moxley and "wanted to go caveman on her," and that the two later told him "We did what we had to do" and "We got her caveman style."

Skakel's attorneys say a jury should hear the allegation.

"The petition for new trial raises substantial issues relating to new evidence never before considered by a jury or a court," said Skakel's attorney, Hope Seeley. "Certainly, if this new evidence had been presented to a jury, Michael Skakel would not have been convicted. Michael Skakel is innocent and we will fight his wrongful conviction and incarceration."

"I really wish we didn't have to go through with this again," she said.

To win a new trial, Skakel's defense must show that Bryant's account is evidence that was not available at the time of his trial and that it likely would have changed the verdict.

Prosecutors say their witnesses will testify that Bryant was not in the neighborhood the night of the murder and did not know Moxley. They also plan to call Skakel's trial attorney, Michael Sherman, to question him about his knowledge of Bryant's account before the trial.

Skakel's defense plans to call his cousin, Robert F. Kennedy Jr., and others to testify that the men knew Moxley and had been to Greenwich, including one woman who says Bryant told her he was in the neighborhood the night Moxley was murdered and knew Skakel was not guilty.

Skakel is incarcerated at the maximum-security MacDougall-Walker Correctional Institution.

"I would say he's not doing that great," Kennedy said. "He misses his son particularly. The prison he's in is a very rough place. He's been threatened. He's had run-ins with some people."

Skakel's older brother, Thomas, was an early suspect because he was the last person seen with Moxley, an attractive popular blond. Investigators also focused on Kenneth Littleton, a Skakel family tutor.

Michael Skakel claimed he was at a cousin's house miles away when Moxley was murdered.

However, investigators focused on him years after the crime when several witnesses said he had confessed or made incriminating statements.

Some of Skakel's reported confessions took place at Elan School, a reform school in Maine that he attended in the late 1970s. Testimony at his trial described bizarre and abusive techniques used at the school, including beatings and boxing matches.

Bryant's claim surfaced in 2003 when he gave a videotaped interview to Skakel's private investigator, Vito Colucci Jr. But since then Bryant and the two men he implicated have invoked their Fifth Amendment right against self-incrimination.

Skakel's appeal also challenges the testimony of Gregory Coleman, who said Skakel confessed to him when they attended Elan. Coleman later died of a drug overdose.

Prosecutors declined to comment, except to say they are eager to proceed.

In November, the U.S. Supreme Court decided not to take up Skakel's appeal, which claimed a statute of limitations had expired before he was charged.

Seeley said that if this appeal fails, she plans to file a petition arguing that Skakel had ineffective counsel at his trial when he was represented by Sherman. Seeley has said Sherman failed to fully investigate witnesses because he had financial difficulties, a claim Sherman denies.