A powerful storm pounded the eastern United States with wind and pouring rain, grounding hundreds of airline flights and threatening to create some of the worst coastal flooding in 14 years. It has been blamed for eight deaths across the U.S. 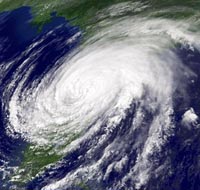 One person was killed in South Carolina as dozens of mobile homes were destroyed or damaged by wind, and two died in car accidents - one in New York and one in Connecticut. The storm system already had been blamed for five deaths on Friday in Kansas and Texas.

The storm flooded people out of their homes in the middle of the night in West Virginia and trapped others. Some New Jersey residents along the shoreline evacuated, and officials in Connecticut urged some coastal residents to do the same. Inland areas from upstate New York to Maine faced a threat of heavy snow.

West Virginia Gov. Joe Manchin declared a state of emergency for all of the state Sunday night.

The Coast Guard had warned mariners to head for port because wind up to 55 mph (88 kph) was expected to generate seas up to 20 feet (6 meters) high, Petty Officer Etta Smith said Sunday in Boston.

Heavy rain and thunderstorms extended from Florida up the coast to New England on Sunday. Wind gusted to 71 mph (114 kilometers) at Charleston, South Carolina, the weather service said.

Storm warnings and watches were posted all along the East Coast, with flood warnings extending from North Carolina to the New York area. Winter storm warnings were in effect for parts of New England and eastern New York state.

Meteorologists expected sustained wind of 40 mph (64 kph) and a storm surge of 3 to 5 feet (1 to 1 1/2 meters), a combination that could cause as much coastal damage to New York's Long Island as a winter storm that wreaked havoc there in late 1992, Gov. Eliot Spitzer said.

More than 5.5 inches (14 centimeters) of rain fell in the New York region by Sunday evening, the National Weather Service said.

In central Florida, a tornado damaged mobile homes in Dundee but no injuries were reported, police said.