Finnish Prime Minister Matti Vanhanen has reached agreement with four parties on a political program to form a center-right government. 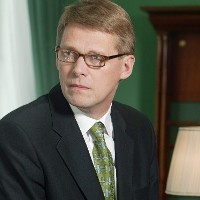 Vanhanen, whose Center Party won the most votes in March elections, said the government would include the conservative National Coalition Party, the Greens and the small Swedish People's Party.

"The new government will rejuvenate Finland during the next four years," Vanhanen said. "We will have a more supportive country with better business opportunities, better employment prospects and a socially more just society."

The four party leaders said their main aims would be to reduce unemployment, cut taxes  including income tax and food tax  increase pensions and pursue environment policies to reduce pollution. Details were to be released later.

Vanhanen said his new Cabinet would have two new portfolios European Union affairs and commerce bringing the total of government ministers to 20, to be named later.

The new coalition, which represents a step to the right for the Nordic nation, had been widely expected after the centrists narrowly won the March 18 elections, ahead of the opposition conservatives.

The environmentalist Greens and the Swedish People's Party, representing Finland's Swedish-speaking minority, were also invited to the formal government talks that began April 11. The new Cabinet, which controls 125 seats in the 200-member Parliament, is scheduled to be sworn in April 19.

The Center Party was also the ruling party in previous center-left government. Its main partner, the left-leaning Social Democratic Party, was the biggest loser in the election, falling to third place and was pushed into the opposition.

No major changes had been expected in the shift from center-left to center-right, in the nation of 5.3 million, where there is broad agreement on most policies, including on maintaining neutrality and a welfare system financed by high taxes.

Finland, home to the world's largest mobile phone maker, Nokia Corp., has a booming economy and consistently ranks high in international surveys on competitiveness. Its notoriously high unemployment rate has dropped to the EU average under Vanhanen's government  7.5 percent in February  but critics say he has failed to improve health care.

Pensions and elderly care were among the main election issues in a country where the proportion of people aged 65 or older has doubled to 15 percent, from 7 percent in the 1950s.