Turkey's prime minister refused to be drawn on whether he will run for president, a day after protests against a possible presidential bid by the Islamic-rooted politician. 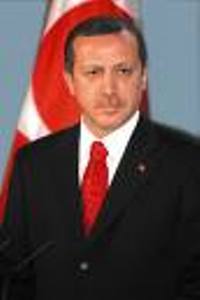 Recep Tayyip Erdogan's party has been eroding secular Turks' longtime grip on power, and many fear the country would turn toward Islam if he were to become president.

Saturday's protest, with an estimated crowd of more than 300,000 people, was one of the country's largest in decades, with protesters changing: "We don't want an imam as president!" and "Turkey is secular and will remain secular!"

Speaking during a trip to Hanover, Germany, Erdogan told a Turkish audience that he was not intent on becoming president. But he said he wanted to serve his country.

"We don't care about ranks and positions," the government-run Anatolia news agency quoted the prime minister as saying. "What if you become prime minister or president _ according to our values, when you die you end up in a two-square-meter place."

Erdogan has brandished his strong religious convictions, speaking out against restrictions on women wearing Islamic-style head scarves in government offices and schools and taking steps to bolster religious institutions in the country, which was founded after World War I on the principle of secular rule.

He also tried to criminalize adultery before being forced to back down under intense pressure from the European Union, which Turkey is trying to join.

The country's pro-secular president, Ahmet Necdet Sezer, has been a brake on the pro-Islamic movement but he is stepping down on May 16. Erdogan's Justice and Development party, which dominates parliament, is expected to announce its candidate this month to replace Sezer in the appointed presidency. Erdogan is expected to announce whether he will run after a meeting with his party on Wednesday.

If he runs, the party is expected to select him as president. Another pro-Islamic official could then be selected for the premiership, placing the executive branch entirely under the control of the Islamic-leaning ruling party.

Turkey aspires to become the first Muslim member of the European Union, and has long touted itself as a bridge between the Western and Islamic worlds. Erdogan enjoys some support in Europe and the United States, where backers hold up Turkey as proof that devout Islam and democracy can be compatible.

But many opponents at home are suspicious. Tens of thousands of people traveled overnight from across the country to attend Saturday's rally in Ankara.

Military officials estimated the crowd at more than 300,000, while organizers put the figure at more than 1 million. Military estimates of past demonstrations have generally proven more accurate than organizers' numbers.

The rally was held near the mausoleum of Mustafa Kemal Ataturk, the revered founder of modern Turkey and the symbol of its secular identity. Starting in 1923 in the ruins of the Ottoman Empire, Ataturk, a soldier, set about on a series of secular reforms that imposed Western laws, replaced Arabic script with the Latin alphabet, banned Islamic dress and granted women the right to vote.

The fiercely pro-secular military staged three coups between 1960 and 1980, pressured a pro-Islamic premier _ Erdogan's mentor _ out of power in 1997, and retains a strong influence over politics.

"We hope that someone who is loyal to the principles of the republic _ not just in words but in essence _ is elected president," Gen. Yasar Buyukanit, chief of the military, said Thursday in a statement widely interpreted as a warning to Erdogan not to run for the post.

Analysts have warned that the economy could be affected by any severe tension between the government and the military.