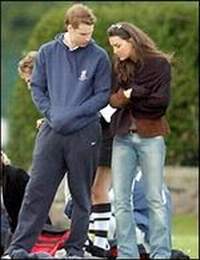 The Sun said the couple had reached an "amicable agreement" to separate. Sources confirmed the split to the Press Association news agency.

William's Clarence House office refused to comment, saying it did not discuss the prince's private life.

The newspaper said the split was caused by the huge pressures on the young couple and William's career in the army. The second in line to the throne graduated earlier this year from Sandhurst military academy and is undergoing further training at an army base in rural England.

The prince, 24, and 25-year-old Middleton met as students at St. Andrews University in Scotland in 2001 and have been dating for several years.

Middleton has been the focus of intense media pressure for months as rumors spread that the couple would announce their engagement. She has frequently had to dodge paparazzi on her way to work as a retail accessories buyer, in scenes that evoked the romance of William's father, Prince Charles, and the then-Lady Diana Spencer a quarter-century ago.

Charles and Diana married at St. Paul's Cathedral in 1981, in a televised ceremony watched by millions around the world. They had two sons, William and Harry, but divorced in 1996 after admissions of adultery on both sides. Diana died in a car crash in August 1997 in Paris.

Last month, Middleton lodged a complaint of media harassment with Britain's press watchdog, the Press Complaints Commission. She settled the claim earlier this month following an apology and admission of error by the Daily Mirror newspaper.