Attorney General John Ashcroft told the world nearly five years ago that the United States had frustrated a frightening al-Qaida plot to detonate a radioactive "dirty bomb" in a major city and had arrested a "known terrorist," Jose Padilla. 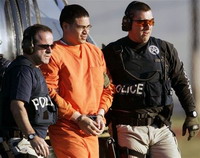 Speaking at a hastily arranged June 2002 news conference in Moscow, Ashcroft darkly suggested the plot could have caused "mass death and injury" and that President George W. Bush had designated Padilla, a U.S. citizen of Puerto Rican descent, as an enemy combatant who would be held in indefinite military custody rather than face civilian criminal charges.

"He was involved in planning future terrorist attacks on American civilians in the United States," Ashcroft said, while a jittery nation still reeled from the Sept. 11 airline hijacking tragedies and anthrax attacks in 2001.

That started an unprecedented odyssey for Padilla, a 36-year-old Muslim convert and one-time member of Chicago's Latin Disciples street gang. A new chapter begins Monday with jury selection for terror support charges in a case with no mention of the "dirty bomb" allegations or purported plots inside the United States.

"It has had so many unbelievable twists and turns," said Michael Greenberger, a University of Maryland law professor who directs the school's Center for Health and Homeland Security. "It really will be the stuff of legend in terms of how we attempted to deal with terrorists in the war on terror."

Padilla, held for 3 1/2 years as an enemy combatant, and co-defendants Adham Amin Hassoun, 45, and 44-year-old Kifah Wael Jayyousi face possible life in prison if convicted on charges of conspiracy to "murder, kidnap and maim" people overseas and of providing support to terror groups.

The three have pleaded not guilty to being part of a North American support cell that funneled fighters, money and supplies to Islamic extremists fighting "jihad," or Muslim holy war, in Afghanistan, Chechnya, Bosnia, Tajikistan and elsewhere around the world. The trial is expected to take at least four months.

Although there is no direct connection, the shadow of the Sept. 11, 2001 attacks hangs over the case, with dozens of potential jurors mentioning the suicide hijackings that killed nearly 3,000 people in questionnaires meant to gauge their ability to be fair and impartial.

"It is not going to be possible to eradicate 9/11 from the thoughts of jurors," said Philip Anthony, chief executive officer of the national jury consulting firm DecisionQuest. "Your strategic issue is ferreting out the underlying beliefs about 9/11. That's a lot harder."

In brief, prosecutors say Hassoun acted as a South Florida recruiter and fundraiser for violent Muslim causes. Padilla, who had worked at a Taco Bell and as a hotel busboy after moving with his family to Broward County, became one of the warrior recruits. Padilla had converted to Islam in a Florida prison while serving a year for a 1991 weapons conviction.

A key piece of evidence is a purported "mujahedeen data form" that prosecutors say Padilla completed in 2000 - his fingerprints are on it - to join an al-Qaida training camp in Afghanistan.

Jayyousi's alleged major role was publication of the "Islam Report", which prosecutors say was used to spread extremist Islamic ideology and assist in the fundraising and terror support efforts. Jayyousi contends he was only reporting on global events of Muslim interest,andhislawyer says prosecutors are attempting to expand the case into a trial of various Islamic political and religious groups.

The alleged conspiracy goes back more than a decade, with prosecutors claiming more than 50,000 intercepted telephone calls and room conversations. Many of the conversations in Arabic use purported code, with words such as "soccer equipment" and "tourism" supposedly meaning weaponry and war.

"Critical to the government's proving its case is persuading the jury that all the dots in what it claims was an international conspiracy can be connected," said Carl Tobias, law professor at the University of Richmond.

Yet there is little proof that the three were directly responsible for any specific acts of terrorism. In court papers, prosecutors listed more generalized victims such as Serbian and Croat forces in the 1990s Bosnian war, the Russian army in Chechnya and "moderate" Muslim governments in Libya, Tunisia and elsewhere.

Defense lawyers say providing assistance to one faction in these conflicts does not necessarily amount to a crime.

"There was a lot of killing on both sides," said Hassoun lawyer Jeanne Baker of the Bosnian war. "Killing only becomes murder under certain specific circumstances. Defending Muslims is not committing murder."

Padilla, the most famous of the defendants, becomes almost a bit player in this alleged conspiracy. His voice is only heard on eight of the FBI wiretaps and he is mentioned on about 20 others. One of those says that Padilla had gone to "the area of Osama," an apparent reference to bin Laden's al-Qaida camps in Afghanistan.

Padilla was hastily added to the existing Miami case in November 2005, a few days before a Supreme Court deadline for Bush administration briefs on the question of the president's powers to continue holding him without charge. Padilla's lawyers had been fighting during his long, isolated brig custody to get him out and into civilian courts.

"The way the law seemed to be heading was that the president could do whatever he wanted with someone picked up on the field of battle but not someone who was picked up in the United States," Greenberger said.

The abrupt legal move essentially ended the war powers legal battle as it related to Padilla, though several Supreme Court justices said they would revisit the issue if it appears Padilla is treated unfairly.

Padilla claimed he was tortured while interrogated in the brig - a charge repeatedly denied by the Bush administration - and sought unsuccessfully to have his case dismissed for "outrageous government conduct." His lawyers also wanted him declared incompetent to stand trial because of mental problems stemming from his brig custody, but that was also rejected.

U.S. officials also claim Padilla admitted involvement and training with al-Qaida during his brig interrogations, as well as the proposed "dirty bomb" plot and another plan to blow up high-rise apartment buildings. None of that can be used as evidence because Padilla had no lawyer present and was not read his constitutional rights. The so-called Miranda rights must be read to a suspect who is placed under arrest.

"If he's acquitted, it's going to be a cautionary tale about denying full constitutional rights to U.S. citizens who are accused of a crime," Greenberger said.