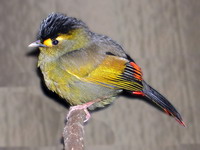 A rare wetland bird which has not been seen for 140 years appeared near the eastern city of Calcutta. May be now biologists will study the species.

The large-billed reed warbler, an olive-brown bird with a long beak and short wings, was discovered in 1867 in the Sutlej Valley of India.

Because it was so rare, scientists had long debated whether it represented a true species or was an aberrant individual of a more common species. That debate ended when an ornithologist captured one outside of Bangkok, Thailand, in March 2006.

Photographs and DNA testing confirmed the large-billed reed warbler as a separate species.

Now, the elusive bird has been rediscovered in India.

Sumit Sen, a bird watcher in Calcutta, said Friday that he photographed the bird during a walk 15 kilometers (nine miles) south of the city near a bird sanctuary. At first glance, the bird looked like a more common species, he said.

But the bird constantly fanned its unique wedge-shaped tail, he said, which made Sen curious enough to take photographs and notes. He spotted the bird on April 1.

"This is a very un-birded area," Sen said. "It's blistering hot and you've got to spend four hours in the heat to see one bird. My belief is this bird was always there - it's just that no one collected it."

"It's a good sign that we can do something about the conservation of this species," said Girish Jathar, a scientist with the Bombay Natural History Society, which confirmed the sighting.

It's been a good year for rare Indian birds. In January, the oriental white-backed vulture, endangered across South Asia by eating tainted meat, was bred in captivity for the first time in India. In late December, 2006 experts confirmed the discovery of a new bird species, the first such find in the country in over 50 years. That brightly plumed bird was named Bugun Liocichla.