Australian leader: HIV-positive immigrants should not be allowed

The comments triggered anger among AIDS workers, who accused Howard of xenophobia and of blaming sufferers for their illness. 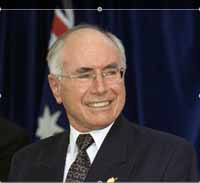 Australian leader: HIV-positive immigrants should not be allowed

Asked in a radio interview whether people with HIV, the virus that causes AIDS, should be allowed into Australia as migrants or refugees, Howard said he would like to take "more counsel" on the issue, but added, "My initial reaction is no."

He said that there may be "humanitarian considerations" in certain cases.

"I think we should have the most stringent possible conditions in relation to that nationwide, and I know the health minister is concerned about that and is examining ways of tightening things up," Howard said.

Howard was asked about the issue during a visit to Melbourne, the capital of Victoria state, where the state health minister said this week that 70 of the 334 new HIV infection cases reported in Victoria in 2006 were among immigrants who had arrived in the country with the virus.

Don Baxter of the nongovernment group the Australian Federation of AIDS Organizations said HIV tests were already among health checks prospective immigrants were given, and most HIV-positive applicants were rejected on the grounds that they could pose an unfair burden on the public health system.

Dr. Chris Lemoh, an infectious disease specialist who is working on a doctorate on the spread of AIDS among African immigrants in Victoria, said excluding people with HIV should be condemned.

"It's a hysterical overreaction, it mixes racism with a phobia about infectious disease," he said. "To not allow people to come on the basis of any health condition is immoral, it's unethical and it's impractical to enforce."

Many countries, including the United States, impose restrictions on immigration and visa approvals for people with HIV, though there are often exceptions in special cases.