European Union and U.S. business groups wrote to U.S. lawmakers, asking them to scrap proposed homeland security rules that would scan all overseas cargo containers - it would raise costs and lead to job losses on both sides of the Atlantic. 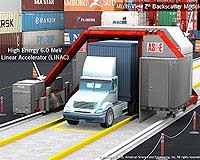 "These provisions threaten to disrupt the global flow of trade and would impose costly mandates on trans-Atlantic business without providing additional security," said BusinessEurope and the U.S. Chamber of Commerce in a joint letter to the chairs of U.S. Congress' Senate Committee Homeland Security and the House Committee on Homeland Security and Government Affairs.

The business federations are the world's two largest, representing millions of companies responsible for the vast majority of trans-Atlantic trade and employing up to 14 million people.

They said the requirement to scan and seal all the 11 million-12 million maritime containers sent from European ports to the United States would impose considerable costs and hassle on international businesses and would lead to significant delays.

The U.S. rules are part of anti-terrorist legislation put forward in the wake of the Sept. 11 attacks that aim to tighten security. The new Democratic majority in Congress has made the legislation one of its most urgent tasks, saying it was long past time to carry out the July 2004 recommendations of the bipartisan commission formed after the 2001 attacks.

"Ultimately these costs would be passed on to U.S. consumers in the form of higher prices for all imported goods," the letter said, claiming that the deadline to implement the rules within three to five years was unrealistic.

They warned that other nations may retaliate with stricter rules of their own.

"Our organizations are very concerned that the United States, by unilaterally imposing 100 percent scanning and sealing requirement on its trading partners, would invite other countries, including the EU, to impose reciprocal requirements on American exports," it said.

The new provisions would undermine existing customs security efforts based on risk analysis and targeted inspections and takes no account of businesses' own checks, it said.

The European Union and the United States are each other's main trading partners, sending around 1.7 billion EUR(US$2.3 billion) worth of goods, services and investments across the Atlantic each day.