This week Lebanon marks the anniversary of a civil war that began three decades ago. Some fear there are stark similarities between that troubled period and today because of deep political divisions, sectarian violence and the ominous specter of two rival governments. 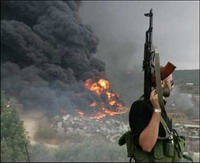 On April 13, 1975, an ambush by Christian gunmen of a busload of Palestinians sparked a civil war that lasted 15 years, killed 150,000 people and caused US$25 billion in damage.

Marking this year's anniversary, the rusted bullet-scarred bus was displayed at a former crossing point on the line that separated Beirut's Christian and Muslim sectors during the war.

Ibrahim Eid, a Lebanese civil society coordinator, said the bus was "a symbol of this day" and should "raise awareness after what we've seen in the last year."

There are indeed stark similarities between the situation today and the period of Lebanon's civil war.

Sectarian tensions are out in the open, and there is incessant talk in the media and by rival politicians of various groups rearming. The situation seemed especially perilous in January when nine people were killed in sectarian violence between government and opposition supporters.

The current instability started in 2005 when former Lebanese Prime Minister Rafik Hariri was killed by a massive truck bomb in Beirut. Since then, a series of bombs have targeted politicians, journalists and commercial centers.

Tensions have produced a divided government. The opposition, led by the Shiite Muslim militant group Hezbollah, has camped outside Prime Minister Fuad Saniora's office since Dec. 1 in an effort to force him to step down, and six members of the opposition have resigned from the Cabinet.

Parliament Speaker Nabih Berri, a Hezbollah ally, has refused to convene parliament, and both he and President Emile Lahoud no longer recognize the Cabinet as legitimate.

Analysts warn the current political crisis could leave the country with two rival governments who battle each other, as was the case in the last two years of the civil war.

Both the government and opposition are sticking to their positions, drawing strength from ties to foreign powers. The government is banking on support from the U.S. and its allies, while the opposition is backed by Syria and Iran, key opponents of Washington's policy in the Middle East.

However, none of the major political parties advocate going back to a time when kidnappings, car bombs, mortars and assassination were regularly used to subdue the other side. Nor do foreign armies that have intervened in the past - those of Syria, Israel and the United States - seem eager to get sucked into another Lebanon quagmire.

While Hezbollah leader Hassan Nasrallah warned at a rally last week that political solutions were at a dead end, he said he would not resort to violence.

"We don't want civil war ... No one wants to burn down his country over political differences," said the leader of the heavily armed guerrilla force that fought Israel in last summer's war and is considered a terrorist organization by the United States.

On the Christian side, a deputy leader of the Phalange Party, which led the Christian militias during the civil war, discounts a rekindling of the conflict despite the rising tensions.

"No one wants to start a civil war. No one has an interest," said Joseph Abu Khalil in an interview on LBC television Thursday.

In this spirit, the Lebanese group Joy of Giving has asked citizens to assemble in downtown Beirut on Friday to remember the civil war's outbreak in "a day of prayers, forgiveness, unity and a return to dialogue."

However, many analysts predict the violence and instability that has plagued the country for the past two years will continue, even if it falls short of all-out war.

Columnist Zayan warned in the leading An-Nahar daily Thursday that Lebanon faces an uncertain future, where "talk about divisions and the possibilities of civil war has become part of the discussions in the cafes, the morning gatherings and on buses."