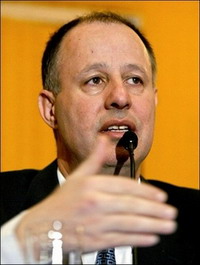 A Syrian-American businessman appeals to authorities of Syria and Israel saying that peace talks could stop the conflict within 6 months. His appearance before the Israeli parliamentary panel was unprecedented.

The businessman, Ibrahim Suleiman, said he did not officially represent the government of Syrian President Bashar Assad, but asserted he had good contacts with high-level officials in Damascus.

Earlier this year, it emerged that Suleiman held eight rounds of secret, unofficial talks with former Israeli Foreign Ministry Director-General Alon Liel, with the knowledge of leaders in the two countries.

On Thursday, Suleiman appeared before parliament's powerful Foreign Affairs and Defense Committee, the first Syrian to address lawmakers in Israel. Since news of the unofficial talks first broke in January, Israeli officials have been interested in hearing what Suleiman had to say, and the panel's session, scheduled to last an hour, went on for 2 1/2 hours.

"Syria right now is ready to speak peace. I challenged the Israeli government to answer President Bashar's call for peace and sit down together," Suleiman told reporters at a news conference after the parliamentary meeting. "I think it can happen in six months."

In the course of their talks, Suleiman and Liel drew up a tentative peace proposal to end one of the Middle East's most bitter conflicts. The plan called for Israel to withdraw from the Golan Heights it seized from Syria in the 1967 Mideast war, and for Syria to end its backing of armed extremists, like Hezbollah guerrillas who warred with Israel last summer.

Suleiman and Liel approached their respective governments about reopening formal peace negotiations, broken off in 2000, but neither country responded, committee members cited Suleiman as saying.

"They suggested that there be officials (in the talks), and there wasn't any response from either side," lawmaker Colette Avital said.

Suleiman was invited to address the lawmakers so they could assess his claims to ties with top figures in the Damascus regime. Israel, which has acknowledged his talks with Liel but distanced itself from them, has questioned the quality of Suleiman's contacts.

In his testimony before the parliament panel, Suleiman did not identify his contacts in Syria, lawmakers said.

Still, committee Chairman Tzahi Hanegbi said he received the impression that Suleiman has "relayed messages more than once between Israel and Syria over the years, and this is evidence of his stature.

"We can use his help because he has contacts with the Syrian leadership in order to spell out our demands, and not just hear what he has to say," Hanegbi added.

Suleiman and Liel last met in late July, during the Israel-Lebanon war.

Assad said repeatedly after the war that he was interested in restarting negotiations. Israeli Prime Minister Ehud Olmert has insisted that Assad end his support for Palestinian militant groups and scale back his ties with Iran. His office had no comment on Suleiman's appearance before the parliamentary committee.

Israel has used informal contacts in the past. The talks that led to the 1993 Oslo peace accord between Israel and the Palestinians began as meetings between academics and unofficial representatives of the two sides.