Croatian former prime minister foceses on his "battle for life" 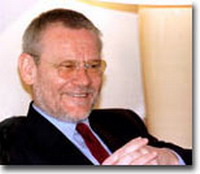 Croatian former prime minister foceses on his "battle for life"

The cancer of the former Croatian Premier Ivica Racan worsened suddenly on Thursday so he was put under intensive care, officials said.

Racan, 62, resigned Wednesday as the leader of Croatia's strongest opposition party, saying he needed to focus on his "battle for life."

Racan has had a cancerous kidney and a metastasis in his right shoulder removed, but doctors last week discovered that the cancer had spread to his brain. He was hospitalized in a clinic in Zagreb.

His party, the Social Democrats, gave no further details about his health Thursday.

Racan's illness is a blow to the Social Democrats. The center-left party - ranked No. 2 in most polls, just behind the governing Croatian Democratic Union - was hoping to win November parliamentary elections and return to power.

He became an emblem his party, and no other member has reached his popularity. The party was expected next week to decide when it would elect a new leader.

Racan was born in 1944 in a Nazi labor camp in Ebersbach, Germany. In the communist-run former Yugoslavia, he was a Communist, but later transformed his party into a pro-Western, center-left group.