The Swedish government earmark around US$72 million to restore environment

The Swedish government said it will earmark around 500 million kronor (EUR54 million; US$72 million) to restore damaged Baltic and North sea environments. 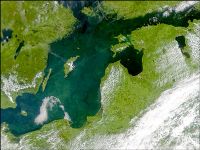 The Swedish government earmark around US million to restore environment

Environment Minister Andreas Carlgren and the country's EU affairs minister, Cecilia Malmstrom, outlined the plan in an opinion article in a Stockholm daily.

It will include projects to re-oxygenize seabeds and recreate natural marine migration paths for various fish species. The plan will be presented in the government's spring budget next week.

Efforts will also be made to intensify its sea cooperation with other Baltic Sea states and within the European Union, the ministers said.

"The efforts in both Sweden and in our neighboring countries have not been enough," they wrote, pointing to the growing patches of oxygen-free sea-beds and the spreading of algae bloom.

The ministers said they plan to invite other governments to take part in the writing of a joint social and economic report on the seas _similar to the Stern report that deals with the global risks of climate change  before Sweden's EU presidency in 2009.