Leading French presidential candidate Nicolas Sarkozy and the office of President Jacques Chirac both denied a news report on Wednesday alleging that the two men had struck a deal to protect Chirac from prosecution once his judicial immunity runs out next month. 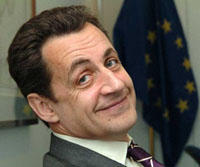 Sarkozy, on a campaign stop north of Paris, said the report in weekly Le Canard Enchaine was not "based on any form of reality." The presidential Elysee Palace called the report unfounded, and declined to comment further.

The satirical weekly, which is also known for breaking investigative stories, alleged that Chirac's support for Sarkozy in the election was offered in exchange for Sarkozy pledging to sponsor a bill that would spare Chirac from prosecution.

Chirac has been protected by presidential immunity during his 12 years in power. Once he leaves office, long-dormant investigations of scandals in his political past could be revived. The most threatening one is a fake jobs affair at his former political party.

Opinion polls say Sarkozy is the front-runner for the two-round vote on April 22 and May 6, followed by Socialist Segolene Royal.

If Sarkozy wins, he will push a judicial reform bill through parliament as early as July, Le Canard Enchaine reported, quoting an unnamed source close to Chirac.

The law would include an article requiring judges to wrap up their investigations faster, with no inquiry lasting more than 10 years, the newspaper alleged. Since the probes against Chirac date back to before he assumed the presidency in 1995, he could not be targeted, it said.

Though both men come from the governing UMP party, they have had tense relations. Sarkozy infuriated Chirac by backing his rival, Edouard Balladur, in the 1995 presidential elections that Chirac won.

Chirac did not endorse Sarkozy until last month.

Sarkozy has promised that he would not get involved in judicial affairs concerning Chirac if he is elected.

"That is not the role of the president," he said last month. "There is a justice system, and it is independent."

Dozens of people have gone on trial in several corruption cases that centered on Paris City Hall when Chirac was mayor from 1977 to 1995.

Chirac's name first appeared in the fake jobs probe in the late 1990s, when investigating judge Patrick Desmure turned up a 1993 letter in which then-Mayor Chirac requested a raise for a secretary who was paid by City Hall - but actually worked at the headquarters of his conservative RPR party, officials have said.

While Chirac is immune, the scandals have continued to produce fallout around him. Former Prime Minister Alain Juppe, a close Chirac ally, was convicted in 2004 for illegal party funding related to Chirac's time as Paris mayor. Juppe was handed a 14-month suspended prison sentence and a yearlong ban from politics.