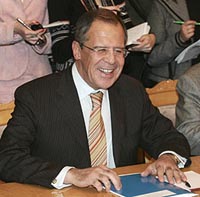 The Russian Foreign Ministry's accusations reflect the Kremlin's growing irritation with foreign criticism in advance of parliamentary elections in December and a presidential vote next March.

Critics say the Kremlin is tightening its grip on Russia's political life to guarantee a smooth transfer of power to a hand-picked successor after President Vladimir Putin steps down when his second and final term ends next spring.

The Foreign Ministry said in a statement that the State Department's report, "Supporting Human Rights and Democracy: The U.S. Record 2006," contained unfair criticism of Russia's political system and distorted its record on human rights.

Russia remains open for a "constructive dialogue," the statement said, but would not tolerate "using democracy and human rights issues as a cover for interference into its internal affairs."

The State Department report, issued last week, pointedly avoided calling Russia's political system a democracy, instead characterizing it as "a weak multiparty political system with a strong presidency," which had only grown stronger in 2006.

The U.S. Embassy in Moscow declined to comment on the Foreign Ministry statement. The U.S. Agency for International Development said it was spending over US$28 million (EUR20.8 million) on projects to strengthen democracy in Russia this year, including nearly US$4 million (EUR3 million) to support democratic political parties.

"USAID will enhance organizational capacity of democratically oriented parties, encourage and intensify coalition-building efforts for the 2007-2008 elections," the agency said in a statement posted on its Web site.

Russia's Foreign Ministry said that the U.S. funding of civic and political groups ran contrary to "such principles of the international law as respect for nation's sovereignty," as well as internationally recognized rules governing embassy activities.

The report, the ministry charged, distorted facts in order "to persuade the American taxpayers and the public opinion that Russia urgently needs democratization."

"The State Department has used a similar tone to incite passions while preparing the "color revolutions,'"' the ministry said, referring to the massive Rose Revolution protests in Georgia in 2003 and the Orange Revolution in Ukraine in 2004 which helped bring pro-Western presidents to power.

Russian officials and lawmakers have accused the United States of engineering the uprisings and warned that the U.S. could try to encourage similar unrest in Russia.

The chairman of the foreign affairs committee of the Russian parliament, Konstantin Kosachev, said earlier this week that the U.S. intention to fund political groups in this election year represented a "direct interference in a country's internal political life ... which we can't accept in any flavor."

Another pro-Kremlin lawmaker, Sergei Popov, suggested Tuesday the Duma, or lower house of parliament, would ask the government to check the finances of groups receiving money from the U.S.

Since Putin took office in 2000, his government has taken consistent efforts to centralize power and eliminate democratic checks and balances. The Kremlin has created a compliant parliament, abolished direct governor elections, established control over television stations and tightened restrictions on political parties and NGOs.

In a speech in Munich in February, Putin shocked Western leaders when he bluntly accused the U.S. of trying to force other nations to conform to its standards.

"One state and, of course, first and foremost the United States, has overstepped its national borders in every way," Putin said. "Who likes this? Who is happy about this?"