McCain pleads for patience in Iraq 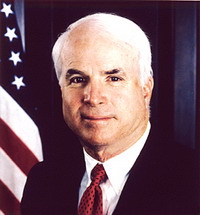 McCain pleads for patience in Iraq

"It is the right road. It is necessary and just," the Arizona Republican said in excerpts of remarks prepared for delivery Wednesday at the Virginia Military Institute.

"Democrats, who deny our soldiers the means to prevent an American defeat, have chosen another road. It may appear to be the easier course of action, but it is a much more reckless one," McCain said as Democrats, who control Congress, continued their standoff with Bush over war funding and a withdrawal timetable.

All three leading Republican presidential candidates support Bush's decision earlier this year to send more troops to Iraq to try to quell violence in Baghdad and Anbar Province. But McCain, who has called for additional forces for years, is the only one directly connected to the policy, and, by extension, the war.

"I know the pain war causes. I understand the frustration caused by our mistakes in this war," the former Vietnam prisoner of war said. He added that while he sympathizes with Americans' war fatigue and regrets the casualties, "I also know the toll a lost war takes on an army and a country."

Seeking to explain the consequences of failure, McCain said: "Our defeat in Iraq would constitute a defeat in the war against terror and extremism, and would make the world a much more dangerous place."

McCain pleaded for patience and asked Americans to give Bush's troop increase a chance to succeed. He said he was encouraged by signs of progress he witnessed during a visit to Iraq last week.

While there, McCain said he was cautiously optimistic about security improvements in Baghdad, even as he toured the capital under heavy military guard. Some Iraqis mocked his characterization as too rosy, and he faced criticism at home of being out of touch with reality.

The episode threatened to undercut McCain's credibility on one of his signature issues, defense. A former Navy pilot held captive in Vietnam for nearly six years, McCain is the only top-tier Republican candidate to have served in the military.

His speech is the first of three major policy addresses McCain plans to give as he seeks to inject momentum into his faltering campaign. He lags Rudy Giuliani in national popularity polls, and came in third behind Giuliani and Mitt Romney in fundraising for the January-to-March quarter.

McCain once was the chief Republican critic on how the U.S. was waging the war. When in January he assumed the post of senior Republican on the Senate Armed Services Committee, McCain became Bush's top pitchman to sell skeptics on the troop increase. His political fate became entwined with it.

"I would rather lose a campaign than a war," he reiterated, the oft-repeated line intended to make the case that McCain is putting the country's interests above his own political aspirations.

Most Americans have turned against the conflict that has claimed more than 3,200 U.S. lives. The latest Associated Press-Ipsos poll showed that a majority of Americans say the United States made a mistake going to war in Iraq, and half call it a hopeless cause.

However, support remains strong among Republicans. Roughly three in four say the United States made the right decision in going to war and nearly the same numbers say the war is a worthy cause.

That means McCain's steadfastness could help him in the Republican primary even as it turns off independents and Democrats in a general election. McCain's aides hope that in the long term voters will view McCain as a man of integrity and principle for his unwavering position on Iraq.