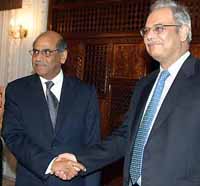 The Doha round of WTO talks, named after the capital of Qatar where negotiations began in 2001, has been stalled since last July over rich nations' refusal to significantly cut farm subsidies and by developing countries' reluctance to grant greater access to their markets.

Top trade representatives from the four countries, seen as the main power brokers within the 150-member World Trade Organization, will hold bilateral meetings Wednesday before going into a formal dialogue a day later, said Shipra Biswas, spokeswoman at the Commerce Ministry.

Japan and Australia will also join the negotiations on Thursday, she said.

The focus is expected to be on seeking convergence of views on key issues such as agricultural subsidies and tariffs, measures to enhance exports from so-called least-developed countries and concessions for poorer nations wanting to protect some of their domestic industries.

This is the first formal meeting of the so-called G-4 - which is how the U.S., EU, Brazil and India are known within the WTO - since it failed to reach an agreement during talks in July. Officials have since met several times informally either on the sidelines of international conferences or through bilateral forums.

During a recent visit to New Delhi, EU Agriculture Commissioner Mariann Fischer Boel told reporters that recent talks helped narrow the difference between India and Europe on some key issues.

However, there have been growing resentment among other members, who feel that the negotiations are being hijacked by rich countries and emerging powers such as India and Brazil. Some of them have threatened to veto any deal, if it lacks transparency and doesn't address their concerns.