Two Labradors that have become celebrities in Malaysia for sniffing out massive stashes of counterfeit DVDs will have their stint extended to help authorities hound movie pirates, an official said Tuesday. 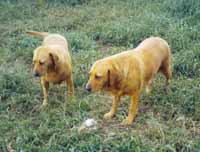 Lucky and Flo, on loan from the Motion Picture Association of America, were originally scheduled to stay in Malaysia for a month through mid-April, but they will now be based here "for the foreseeable future," said MPAA senior operations executive Neil Gane.

The extension was requested by the Malaysian government, which "found the help (of the dogs) in their operations to be very successful" and wants more time with Lucky and Flo to evaluate whether it should train its own canines to perform similar work, Gane said.

The black Labradors will mainly participate in more Malaysian raids, but they could also be deployed to other countries for anti-piracy operations from time to time, Gane said. He declined to identify which countries were being considered, citing security reasons.

Malaysian movie pirates have reportedly placed bounties on Lucky and Flo, who have so far helped uncover 1.2 million pirated DVDs and CDs worth nearly US$3.5 million (EUR2.6 million) in raids on warehouses, shops and offices that served as storage centers for pirated discs.

Deputy Domestic Trade Minister S. Veerasingam said his ministry, which handles anti-piracy efforts, is considering setting up a canine unit to take over from Lucky and Flo, the national news agency Bernama reported.

"However, what we need is the cooperation of consumers to avoid buying pirated products," Veerasingam was quoted as saying by Bernama. "If the consumers refuse to cooperate, Lucky and Flo and any other dogs will not be able to eradicate piracy."

Lucky and Flo are the world's only dogs trained to detect a chemical used in making discs, the MPAA has said. Malaysian officials say they have been useful because they found discs that might otherwise have gone unnoticed in locked rooms and concealed compartments.

Malaysia is among the world's main producers and exporters of pirated discs, the U.S. government and the MPAA have said. According to the Malaysian government, 5 million discs were seized in more than 2,000 raids nationwide last year, and 780 people were arrested.

The MPAA says its members, which include Paramount Pictures, Warner Bros, 20th Century Fox and Universal, lost US$1.2 billion (EUR900,000) to Asia-Pacific movie pirates in 2006.