The Taliban will kill four Afghan medical personnel and their driver unless the government releases two Taliban commanders, a purported spokesman for the group said Monday. 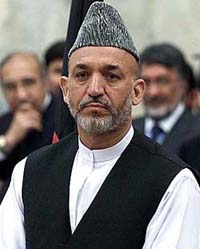 The threat came a day after the hard-line militia beheaded Ajmal Naqshbandi, an Afghan translator seized last month along with an Italian reporter after authorities refused to repeat the kind of prisoner swap that secured the Italian's freedom.

A spate of abductions has demonstrated the lawlessness of southern Afghanistan, where the Taliban remain strongest, despite the presence of thousands of foreign troops. The kidnappings have also kicked off a debate over the ethics of negotiating with kidnappers.

The Taliban said it kidnapped a doctor, three nurses and their driver on March 27 in Kandahar province, adjacent to Helmand.

"If the government does not release our two Taliban commanders, then we will give the same punishment as we did with Ajmal (Naqshbandi)," Shahabuddin Atal, who claims to speak for senior Taliban commander Mullah Dadullah, told The Associated Press on Monday.

The Taliban had made a similar demand in exchange for the release of Naqshbandi, a freelance journalist and translator who was kidnapped along with Daniele Mastrogiacomo of the Rome-based La Repubblica newspaper and a driver in Helmand province on March 5. The driver, Sayed Agha, was beheaded last month.

Mastrogiacomo was freed March 19 in a much-criticized swap for five imprisoned Taliban militants.

"In exchange for the Italian journalist, the Afghan government and foreigners together handed over five Taliban. He was a foreign journalist," Atal said by telephone from an undisclosed location.

"When we asked for an exchange of two Taliban commanders for the Afghan journalist, the Afghan government did not respond, and they didn't try to negotiate for Ajmal's release," he said.

This proves that "this government is working only for foreigners, not for Afghans," Atal said.

He said Naqshbandi was beheaded in Helmand's Garmsir district and that his family could find his body there.

The murder was widely condemned.

"This barbaric killing reminds us of why the United States and NATO are in Afghanistan in the first place: to help the good people of that country defeat the Taliban extremists and their al-Qaida allies," said Gordon Johndroe, national security spokesman for U.S. President George W. Bush.

Press rights group Reporters Without Borders said it was "revolted by this cowardly murder."

Naqshbandi was "the victim of double standards because the campaign for his release was not strong enough. Ways must be found to protect local people who work with foreign journalists or else these media assistants will not be able to work at all," the group said.

The prisoner swap that secured Mastrogiacomo's release was criticized by Afghan lawmakers and foreigners working in Afghanistan as an incentive for more militant kidnappings.

President Hamid Karzai on Friday defended the exchange, saying the case was threatening Prodi's government. However, he ruled out further swaps.

The Taliban have also claimed that they kidnapped two French workers from the aid group Terre d'Enfance and their three Afghan staff. The five, who were based in southwestern Nimroz province, went missing last week.

Taliban spokesman Atal said he had no information about the missing French.

Nimroz Gov. Ghulam Dastagir Azad said Sunday he had no news from the kidnappers or the five missing people.