Iraqi Prime Minister Nouri al-Maliki thanked the Japanese defense minister on Monday for Japan's support in rebuilding his country and urged Japanese companies to return and do business there. 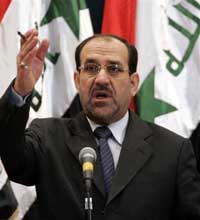 "I have come here to express my thanks for Japan's support of Iraqi reconstruction and for helping to develop the political process," al-Maliki said at the start of a meeting with Defense Minister Fumio Kyuma.

Al-Maliki also said during their 20-minute conversation that he expected Japanese companies to come back to Iraq, adding that his government was making efforts to maintain public safety and stabilize the economy, a Defense Ministry spokesman said on condition of anonymity in accordance with ministry policy.

Earlier Monday, al-Maliki met with Japanese Emperor Akihito and Empress Michiko to start his four-day visit, which was delayed when Iran refused to allow his plane to fly over its airspace.

Al-Maliki, who met briefly with the imperial couple, also was to meet Prime Minister Shinzo Abe later in the day.

Tokyo backed the U.S.-led invasion of Iraq and provided troops for a non-combat, humanitarian mission in the southern city of Samawah. It withdrew its ground forces in July 2006 but has since expanded Kuwait-based air force operations.

Late last month, Japan's Cabinet approved a two-year extension of the country's air mission in Iraq after it expires in July.

Al-Maliki's visit comes two weeks after Iraqi Vice President Tariq Al-Hashimi was in Tokyo and said U.S.-led coalition forces should not be withdrawn until Iraq's army is fully trained and ready to take over security.

Members of the delegation traveling with al-Maliki said the Iranians informed his pilot that the plane could not enter their airspace because they had not been notified in advance of the leader's need to cross Iran.

The plane was diverted to Dubai in the United Arab Emirates, where al-Maliki stayed in the airport for more than three hours while his craft was refueled and a new flight plan was filed, the delegation members said.