Shiite cleric orders his militiamen to unify against Americans

The powerful Shiite cleric Muqtada al-Sadr ordered his militiamen on to unify to oust American forces and argued that Iraq's army and police should join him. 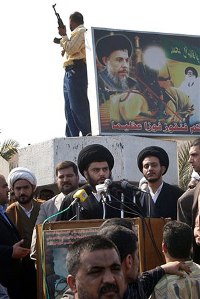 Shiite cleric orders his militiamen to unify against Americans

The U.S. military announced the weekend deaths of 10 American soldiers, including six killed on Sunday.

Security remained so tenuous in the capital on the eve of the fourth anniversary of the U.S. capture of Baghdad that Iraq's military declared a 24-hour ban on all vehicles in the capital from 5 a.m. Monday. The government quickly reinstated Monday as a holiday, just a day after it had decreed that April 9 no longer would be a day off.

Among the 10 U.S. deaths announced Sunday were three soldiers killed by a roadside bomb while patrolling south of Baghdad; one killed in an attack south of the capital; and two who died of combat wounds sustained north of the capital, in Diyala and Salahuddin provinces.

On Saturday, the military said, four U.S. soldiers were killed in an explosion near their vehicle in Diyala province the new headquarters of Iraq's sectarian slaughter.

At least 3,280 members of the U.S. military have died since the beginning of the Iraq war in March 2003, according to an Associated Press count. The figure includes seven military civilians.

South of Baghdad, a truck bomb exploded near the Mahmoudiyah General Hospital, killing at least 18 people and wounding 23. The pickup truck loaded with artillery shells blew apart several buildings in a warren of auto repair shops.

Violence in Iraq remained as relentless as the deepening debate in the United States about the way forward in the war four years after Marines and the Army's 3rd Infantry Division swept into the Iraqi capital 20 days into the American invasion.

At least 47 people were killed or found dead in violence Sunday, including 17 execution victims dumped in the capital.

Al-Sadr commands an enormous following among Iraq's majority Shiites and has close allies in the Shiite-dominated government. The statement Sunday carried his seal and was distributed in the Shiite holy city of Najaf, where the cleric called for an enormous demonstration to mark the fourth anniversary of Baghdad's fall.

"You, the Iraqi army and police forces, don't walk alongside the occupiers, because they are your archenemy," the al-Sadr statement said.

He urged his followers not to attack fellow Iraqis but to turn all their efforts on American forces.

"God has ordered you to be patient in front of your enemy, and unify your efforts against them not against the sons of Iraq," the statement said.

Al-Sadr apparently issued the statement in response to three days of clashes between his Mahdi Army militiamen and U.S.-backed Iraqi troops in Diwaniyah, south of Baghdad.

"He is not calling for a resurgence of sectarian conflict. He's striking a nationalist chord. We're going to have to watch him closely. He's not our friend. ... He's acknowledging that the surge is working," the senator, a strong backer of the war, said on CNN's "Late Edition with Wolf Blitzer."

In Najaf, police spokesman Col. Ali Jiryo said cars were banned from entering the city for 24 hours starting 8 p.m. Sunday. Buses were to be at all entrances of the city to transport arriving demonstrators or other visitors to the city center. Najaf residents would be allowed to drive, he said.

Hours after the Mahmoudiyah bombing, five charred bodies littered a courtyard. Most of the dead were mechanics in the repair shops, officials said. The hospital was slightly damaged by shrapnel. Many of the victims were in their homes at the time of the blast, 20 miles south of Baghdad.

While religious-based killings are lower in Baghdad in the eighth week of the security crackdown, Sunni insurgents including al-Qaida in Iraq and Shiite militia fighters have shifted their battleground to regions like Baqouba, the Diyala province capital northeast of Baghdad.

At least 62 bodies execution victims who were tortured were found in or near Baqouba last week alone.

In a rural area just east of Baghdad, three mortar rounds crashed into houses and six people were taken to a hospital in Sadr City with breathing troubles from a possible chemical agent, police said.

Doctors said the victims' faces turned yellow and they were unable to open their eyes. One hospital official said the chemical was chlorine, although such an effect was unlikely given the small amount of the chemical that could be fitted into the shells.

U.S. forces captured a senior al-Qaida leader and two others in a raid Sunday morning in Baghdad, the U.S. military said.

The al-Qaida figure was identified as "the gatekeeper to the al-Qaida emir of Baghdad" and was linked to several car bomb attacks in the Iraqi capital, the military said in a statement, without naming the captive.

"The faithful should participate in a demonstration in Najaf on April 9, demanding that the occupiers withdraw from our lands. They should carry or wear Iraqi flags," al-Sadr's office said.

On Sunday, Iraqi flags flew from most houses and shops in Sadr City. Drivers and motorcyclists affixed them to their vehicles. Police escorted convoys of pickup trucks overflowing with young boys waving Iraqi flags, en route to Najaf.

An Iraqi flag was hoisted over a military base in Basra, Iraq's second-largest city, as Iraqi troops took control of the facility Sunday from British forces. The Shatt al-Arab base is the second to be transferred to Iraqi control in Basra over the past month.