Pennsylvania principal sues students for slandering him in internet 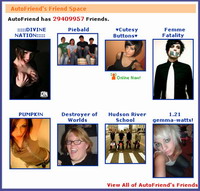 Pennsylvania principal sues students for slandering him in internet

In the lawsuit, Eric W. Trosch alleged that the three profiles created in December 2005 on the social networking Web site damaged his reputation, humiliated him and hurt his earning capacity.

The profiles "went far and beyond what you would see on a bathroom wall in a school," said Trosch's attorney, John E. Quinn.

Trosch was co-principal of Hickory High School at the time the profiles were created and is now principal of Hermitage Middle School, in the same western Pennsylvania school district.

According to the suit, which seeks unspecified punitive damages, a profile by defendant Justin Layshock said Trosch smoked marijuana and kept a keg of beer behind his desk. Trosch alleges that another profile created by Thomas Cooper said his favorite movie was pornographic, and a third created by brothers Brendan and Christopher Gebhart said Trosch liked having sex with students and brutalizing women.

Layshock was suspended and sent to an alternative program after Trosch learned of the profile. In an effort to return to regular classes he sued, claiming the profile was protected by constitutional free speech rights, but a judge last year declined to order the school to transfer him back.

Layshock's father, Donald, said he could not comment on Trosch's lawsuit because of the pending federal suit. Attorneys for Cooper and the Gebharts also declined to comment to The Herald of Sharon, Pennsylvania.

Quinn said it remains unknown who created a fourth Myspace profile that he described as "the most graphic and lurid of them all."