Hillary Rodham Clinton pursues the precedent-setting achievement of becoming the first female candidate to win the presidency. How, then, did she also become the candidate of the Democratic Party establishment - a title historically attached to less-than-scintillating contenders like John Kerry, Al Gore and Walter Mondale? 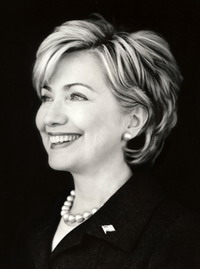 It's a curious paradox for Clinton, a presidential hopeful who calls herself a feminist and touts her experience as a woman and a "mom." But her long career in Washington, army of political consultants and marriage to a former president have all cast her as a political insider rather than a pioneer.

And then there is the Obama factor. With his newcomer's appeal and quest to be the first black president, the Illinois senator has managed to dilute the significance of Clinton's history-making run.

Obama's grassroots allure was manifest this week, when the candidates disclosed their first quarter fundraising totals.

Clinton raised a record-setting $26 million (19.4 million EUR) from a network of donors developed through her two Senate races and Bill Clinton's vast connections. But Obama's $25 million (18.7 million EUR) almost matched her total and came from twice the number of contributors and a much more robust Internet presence.

The sense of inevitability Clinton has tried to project may have robbed her campaign of some of the freshness and excitement that is luring many party activists to Obama, analysts say. But his strong fundraising numbers have shaken the idea that Clinton is unbeatable, perhaps freeing her to engage more spontaneously on the campaign trail.

"Clinton has to conform to stereotypes and defy them, and she has to run as both the insider and the outsider," said Marie Wilson, founder of the White House Project, which promotes women running for high office. "She has to show she's not entrenched in a system that has not been friendly to women, but also that she really knows it and is good at it."

Clinton advisers insist her conflicting identities are a sign of strength. They believe her powerful organization and long career in public life have helped her to be taken seriously as a groundbreaking presidential candidate.

Like the campaigns of other so-called establishment candidates in the past, Clinton's has been steady, centrist, and relatively risk-free.

She's collected endorsements from a string of prominent public officials, racked up miles (kilometers) on trips to early voting states like Iowa and New Hampshire, and prevailed in the first quarter fundraising race. Her speeches have revealed an enviable mastery of the details of public policy, but she's avoided committing to specifics on contentious topics, like how to fund universal health care.

Clinton's refusal to apologize for her vote authorizing military action in Iraq in 2002 has been her only real political risk so far. She's angered many anti-war Democrats and opened a window of opportunity for Obama and former North Carolina Sen. John Edwards, both outspoken critics of the war.

Her advisers acknowledge her position has cost her the support of many activists, but they believe most voters now care more about how to end the war than how it was started.

Her pattern of caution has also generated some controversy. After the nation's top military officer, Gen. Peter Pace, made headlines by declaring homosexual acts "immoral," Clinton was asked whether she agreed with Pace's views.

"I'll leave that to others to conclude," Clinton replied, setting off a wave of criticism from gay supporters. She later issued a statement insisting she did not believe homosexuality was immoral, and acknowledged that her initial answer "sounded evasive."

Joe Trippi, who managed Howard Dean's insurgent anti-war presidential bid in 2004, said Clinton's unique position as both the establishment favorite and first serious woman candidate make her a powerful contender in both the primary and general election.

"There's a lot of women, particularly younger women, who really look at her as a trailblazer breaking the impossible glass ceiling," he said, adding that she is a much stronger insider candidate than was John Kerry, whom Dean nearly toppled four years ago.

But, Trippi added, Clinton should resist the overly cautious approach that has bedeviled so many front-runners in the past.

Recently, Clinton's campaign has taken steps to generate greater excitement about her candidacy among women voters. Women for Hillary, a social networking organization aimed at encouraging women to talk up Clinton with their friends and co-workers, was launched earlier this month. The campaign has also rolled out endorsements from women famed for breaking barriers in their fields, including 1970s-era tennis star Billie Jean King and former Secretary of State Madeleine Albright.

And while Clinton has promised toughness, pledging to "deck" opponents rather than fold to pressure, her campaign has also stressed the candidate's softer side.

Recently, a group of her top female advisers took turns praising their boss in a Web chat aimed at women. Campaign manager Patti Solis Doyle told the audience that she tucks her two children, ages 9 and 5, into bed each night and that "Hillary is very conscious of not calling during bedtime hours."

"She's always going to be the insider, but we've got to lighten up and celebrate the fact we've got a woman in there who could actually be the president," Wilson said. "I want the country to be fair with her."