A congresswoman  from California suggest convicted arsonists being forced to register on a national database similar to one used for sex offenders. 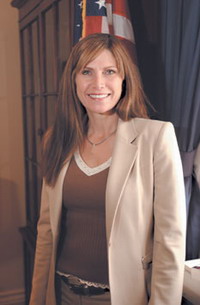 Republican Rep. Mary Bono said the idea followed the deaths last fall of five firefighters battling an arson wildfire. The man charged in that blaze is also accused of setting nearly two dozen other fires between May 16 and October 26.

States including California, Montana and Illinois already have their own state arson databases, but a national database would help alert authorities when out-of-state arsonists move in, officials said.

"Tracking criminals of this nature that have high recidivism rates will allow our officers to more efficiently investigate new offenses," Bono said Thursday.

Bono's proposed MATCH Act, for Managing Arson through Criminal History, would require convicted arsonists to report to authorities each year where they live, work or attend school. Their photos and fingerprints would be maintained in the database.