An independent organization that keeps tabs on glacial melting in Austria's Alps said Friday its latest survey confirms that the ice sheets continue to shrink significantly and predicted most will vanish by the end of the century. 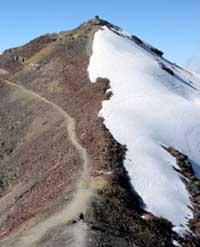 In a new report, the Austrian Alpine Association said experts measured 105 of Austria's 925 glaciers last year and found they had receded by an average of 16 meters (52 1/2 feet), with one of the sheets shrinking a dramatic 80 meters (262 feet) during 2006.

The country's glaciers have been shrinking by an average of 10-15 meters (32-49 feet) a year, double the rate recorded a decade ago, the environmental group said.

It said its team of 17 experts measured the "tongues" or outer edges of the glaciers both by hand and with digital equipment, recording shrinkage down to the nearest centimeter, or less than half an inch.

If the trend holds and they continue melting at the current rate, "most of the 925 glaciers will have disappeared" by the century's end, warned Gerold Benedikter, a scientist with the Innsbruck-based association.

The report said the most marked instance of melting was recorded in Austria's Oetztaler region, in the alpine province of Tyrol and near the border with Italy, where the Taschachferner glacier - which shrunk by 105 meters (344 1/2 feet) a year earlier - lost another 80 meters (262 feet) in 2006.

Experts also found at least one instance of a glacier bucking the trend and increasing slightly in size: the Freigerferner glacier in the Stubaier Alps southwest of Innsbruck, which gained 2 meters (6 1/2 feet). The group, founded in 1862 by the former imperial Academy of Sciences, characterized that as a purely local phenomenon.

Although year-to-year changes in the size of glaciers and the rate of melting are not scientifically significant, experts say that figures charted over longer periods clearly point to a troubling trend of accelerated melting.

Earlier this year, scientists at the University of Innsbruck's Institute for Ecology said Austria's glaciers were shrinking by about 3 percent a year, and projected most could disappear from the Alps as early as 2050.

Experts in Switzerland, where the World Glacier Monitoring Service is based, have sounded similar warnings and say the problem is not confined to the Alps.

Data collected by aircraft and satellites since 2002 has shown that many of the planet's estimated 160,000 glaciers, from the Rocky Mountains to the Himalayas, have been shrinking.

Scientists say the phenomenon has been occurring for more than a century, suggesting that manmade emissions of carbon dioxide are combining with purely natural factors, such as a shift in jet streams pumping warmer air into traditionally cooler northern climes.