Every day, some 15,000 people line up at the Berlin Zoo to see Knut the polar bear cub. But even those far from the zoo cannot escape his little button-eyed face. 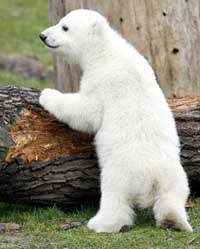 Born at the zoo on Dec. 5, Knut - who was rejected by his mother and hand-raised by zookeepers - rose to fame last month thanks to television and newspaper pictures. Since then, Knutmania has just kept on gathering steam.

Together with Leonardo DiCaprio, he appears on the cover of Vanity Fair's current May issue, with pictures taken by star photographer Annie Leibovitz. He has the cover of the German edition all to himself.

Zoo officials say attendance has roughly doubled on average since Knut came along.

"Obviously, his innocent, babylike looks are an important reason," said Peter Walschburger, a psychologist at the Free University in Berlin, adding that Knut's white fur and soft, round features made people want to protect him.

Haribo, the German candy company that makes gummi bears, has created a white, marshmallow-like Knut candy that will hit grocery stores across Germany and Austria next week. The candymaker also will contribute part of its proceeds to the zoo.

"Our Knut candies have raspberry flavor and are sold in boxes of 150 pieces or over the counter for five cents each," Marco Alster, a Haribo spokesman, said Thursday.

Knut even has his own blog in German, English and Spanish - written by a journalist at the regional public broadcaster, Rundfunk Berlin-Brandenburg.

The boom may run its course in the next few months: Unlike his stuffed replicas, cute Knut will soon grow up - into a huge and much less cuddly adult.