Japanese skating wonderkid Mao Asada has had one goal since she was a little girl - to compete in an Olympics. 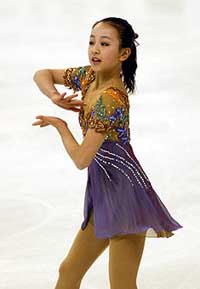 That dream is within reach for the 16-year-old, who last month added a World Figure Skating Championships silver medal to her growing treasure chest. And with the 2010 Winter Games in Vancouver looming on the horizon, she already has set her sights high.

"From when I was very small, it's been a great dream of mine to enter the Olympics and win a gold medal," Asada told reporters at a news conference in Tokyo Friday. "I don't know what will happen afterward, but at least I know now that I have to focus on this goal."

Asada, who trains with Michelle Kwan's coach, Rafael Arutunian, was too young to compete in the 2006 Winter Games. But the 2004 and 2005 world junior champion said she wasn't disappointed at missing out.

"Thinking about it afterward, I realized rules are rules so it wasn't such a big shock. I just thought, 'I'll get to go to the next one,"' she said.

Among those expected to compete against Asada if she makes it to Vancouver are teammate Miki Ando, the new world champion, and South Korea's Kim Yu-na.

Kim is a month older than Asada and took her junior crown from her last year. She appeared to have the gold medal in her grasp at last month's world championships before two falls in the middle of her short program left her settling for the bronze medal.

"This has been the first time for me to compete with someone the same age as me," Asada said. "I think she will make a good rival in Vancouver as we tend to stimulate each other to do better."

Asada herself may have missed out on a gold last month when she tried one of her trademark triple axels in her long program, only to be slightly two-footed on her landing. She also underrotated a combination.

"I need to practice more and I need to enter each competition with more confidence in myself," Asada said.