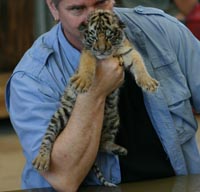 Vietnamese agriculture officials last month asked Prime Minister Nguyen Tan Dung to allow them to confiscate the 41 tigers in southern Binh Duong province and transfer them to semi-wild facilities. But they later backed down after the minister visited one of the farms and found the animals were well cared for.

Six international and country conservation groups, including WWF, TRAFFIC and the World Conservation Union, sent a letter to Dung urging that the tiger owners be prosecuted, the farms closed down, and the animals sent to zoos or other facilities that are equipped to deal with the big cats.

"The public should be left without doubt that no one should be allowed to keep tigers as pets or breed this endangered species, and all effort should be focused on the conservation of this animal in the wild," the letter said.

Officials from the organizations did not immediately respond Friday to the prime minister's decision.

The farm owners must ensure the safety of people in the area and take good care of the animals, said Do Quang Tung of the Forest Control Department. The four owners can continue to breed the tigers, but no other private farms are permitted to open, under the prime minister's ruling.

The plight of the tigers held in captivity in southern Binh Duong province since 2000 had raised a high-profile national debate, prompting strong protests from the public and attracting huge coverage in the national state media.

"They have done a good job in raising the tigers, (authorities) should praise them instead of bullying them," Kiet was quoted as saying.

Vice Agriculture Minister Hua Duc Nhi said on the ministry's Web site Friday the prime minister was asked to allow the private farms to continue raising the tigers because the country had no other facilities to care for them. Since most were born in captivity, they cannot be returned to the wild.

"Not only myself, but also the public are very glad to hear this news," said Ngo Duy Tan, owner of 23 tigers. "I will continue to take good care of the tigers."

Vietnam's tiger population has decreased dramatically since the end of the Vietnam War in 1975 because of shrinking natural habitat and poachers, who use tiger bones to make traditional medicines they believe can cure many illnesses.

About 100 tigers live along borders with Laos and Cambodia, down from thousands before the end of the war, according to the Forestry Department. It is illegal to hunt or trade them.