Ethiopia was pressed to release details of detainees from 19 countries held at secret prisons, where U.S. agents have carried out interrogations in the hunt for al-Qaida in the Horn of Africa. 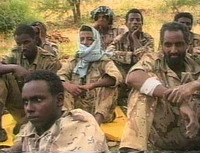 Canada, Eritrea and Sweden were lobbying for information about their citizens in Ethiopia, where human rights groups say hundreds of prisoners, including women and children, have been transferred secretly and illegally. An investigation by The Associated Press found that CIA and FBI agents have been interrogating the detainees.

Officials from Ethiopia, which has a troubling human rights record, were not immediately available for comment, but have in the past refused to acknowledge the existence of the prisons.

"We know that he is in Ethiopia," said Rejean Beaulieu, a Canadian Foreign Affairs spokesman said of its citizen, Bashir Makhtal. "We've been making, and continue to make, representations both here in Ottawa and in Ethiopia to get access to him."

Some detainees were swept up by Ethiopian troops that drove a radical Islamist government out of neighboring Somalia late last year. Others have been deported from Kenya, where many Somalis have fled the continuing violence in their homeland.

The detainees include at least one U.S. citizen and some are from Canada, Sweden and France, according to a list compiled by a Kenyan Muslim rights group and flight manifests obtained by AP. They also include citizens from Eritrea, Saudi Arabia, Tanzania, Rwanda, Tunisia and Morocco.

Eritrea is asking the Kenyan authorities for details on three of its citizens, handed over to Somalia on Jan. 20, and that human rights groups say are in Ethiopia.

Eritrea and Ethiopia are bitter rivals and have no diplomatic relations.

Kenyan government spokesman Alfred Mutua said the government had no comment to make until they received an official communication from the Eritrean government.

Swedish Foreign Ministry spokeswoman Nina Ersman said they had managed to gain access to its citizens being detained. Of those still being detained, two are Swedish citizens and one has a permanent residence permit. "We have visited them, but not in recent days," she told the AP, although she did not know the dates of the visit.

Jonathan Hafetz, a lawyer at the Brennan Center for Justice at the New York University School of Law who has been assisting the family of a detained U.S. citizen, 24-year-old Amir Mohamed Meshal, said Thursday he had still not spoken to him.

According to the U.S. State Department late Wednesday, a U.S. embassy official made a third visit to Meshal on Wednesday.

In a message passed from the official to his parents, Amir Meshal asked his family to be "patient," and said he missed his mother's cooking "more and more every day."

Ethiopia has a long history of human rights abuses. In recent years, it has also been a key U.S. ally in the fight against al-Qaida, which has been trying to sink roots among Muslims in the Horn of Africa.