Syrian President Bashar Assad should illustrate his intentions toward coexistence with Israel through actions, even minor ones, if peace talks between the two nations are to be resumed, an Israeli Cabinet minister said Thursday. 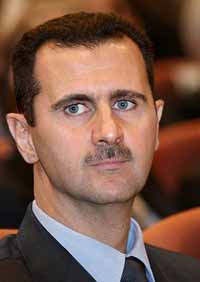 The comments by Zeev Boim came after visits by Nancy Pelosi, Speaker of the U.S. House of Representatives, to both the Israeli and Syrian leaders.

Pelosi said Wednesday that she brought a message to Assad from Israeli Prime Minister Ehud Olmert that Israel was ready for peace talks with Syria. However, Olmert's office said in a statement later this would only be possible if Assad stops supporting Hezbollah and Hamas, two militant groups fighting Israel.

"The fact that he is holding an olive branch in his beak still doesn't turn him into someone who really wants peace with Israel," Boim told Israel Radio. "We are not asking that he totally stop, just do something even minor that will show a real intention through some sort of action."

Olmert's office said it had no comment Thursday due to the weeklong Passover holiday. Boim, Minister of Immigrant Absorption, is a member of Olmert's centrist Kadima Party.

Boim said Israel would be willing to give up the Golan Heights, captured from Syria in the 1967 Mideast War, as part of an eventual deal. Past negotiations with Syria have centered on the strategic plateau, but the sides could not agree on the scope of the withdrawal.

"We know that the price will be, in the end, that Israel will come down from the Golan Heights," Boim said.

After meeting for three hours with Assad, Pelosi said that he is "ready to engage in negotiations for peace with Israel."

She said she expressed to Assad "our concern about Syria's connections to Hezbollah and Hamas" and militant fighters slipping across the Syrian border into Iraq.

Pelosi had met with Olmert on Sunday.

Pelosi's meeting with Assad annoyed the White House, which has shunned Damascus over its support for Hezbollah and Hamas. Washington also accuses Syria of fueling Iraq's violence by allowing Sunni insurgents to operate from its territory.