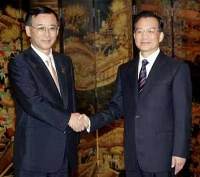 Speaking to Japanese media in Beijing ahead of a three-day visit to Japan next week, Wen said "individual Japanese leaders have visited (the shrine) numerous times and hurt the feelings of the Chinese people," Kyodo News agency reported.

"I hope this will never happen again," the agency quoted Wen as saying.

Yasukuni Shrine, which honors the country's 2.5 million war dead, is a diplomatic flash point between Japan and its neighbors China and South Korea, which see the shrine as a symbol of Japan's militaristic past.

Japanese Prime Minister Shinzo Abe has refused to make clear whether he plans to visit the shrine, and has said he will not confirm any visits he may make. On Wednesday, he repeated that policy of ambiguity.

"My position on the Yasukuni issue is as stated before," Abe said.

Abe later told reporters he would work to build constructive relations with the Chinese premier.

"I hope to hold talks that will lead to progress toward building mutually beneficial relations," Abe told reporters at his official residence late Wednesday.

Tokyo-Beijing ties soured under Abe's predecessor, Junichiro Koizumi, who repeatedly visited the shrine despite China's protests. Relations have improved since Abe took office last September, and he has not since visited the shrine.

Wen said he hoped his visit would be successful and would help "melt the ice" in relations, according to China's official Xinhua News Agency.

Wen said China and Japan will issue a joint document to "spell out the two countries' aspirations to build a strategic and mutually beneficial relationship" the report said, but did not give any details.

The two Asian powers will aim to increase military exchanges and boost defense dialogue, Wen said. He defended China's growing defense expenditure, which has made its neighbors uneasy.

"The key point is that China's limited military power is used to safeguard the country's security and unification," he was quoted as saying.

China will also continue to push for progress on the six-nation talks on North Korea's nuclear ambitions, Wen said.

Wen said he would ask Abe to visit China again this year and said Chinese President Hu Jintao will make a trip to Japan "at a time suitable for both countries."

Abe visited Beijing shortly after taking office in September, and said last week he is considering returning to China.

Japanese Chief Cabinet Secretary Yasuhisa Shiozaki said the possibility of a visit would be discussed during Wen's trip to Japan.

"Of course we will consider this in a positive light," Shiozaki told reporters in Tokyo.

Wen also expressed hopes that progress can be made in negotiations over the two countries' competing claims to gas reserves in the East China Sea, Kyodo said.

Last week, another round of talks over the issue ended without result despite hopes it could be resolved before Wen's visit. Both nations are eager to develop new sources of energy and have held talks to try to settle the dispute since 2004.

Wen travels to Japan on April 11, and is slated to meet with Abe and make a speech in parliament. His visit is the first to Japan by a Chinese premier in eight years, according to China's Foreign Ministry.