The woman who claims to be James Brown's fourth wife has selected a special guardian she wants appointed for her son, the first step toward determining the child's paternity. 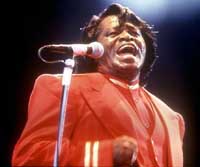 Brown's trustees have already presented a list of attorneys to serve as the special guardian. Hynie's petition asks that Charleston attorney Stephen M. Slotchiver be appointed.

A message left for Slotchiver was not returned Tuesday. A court hearing to appoint the special guardian has been scheduled for later this month, Rosen said.

Last month, Brown's trustees filed a motion, asking a judge to order DNA taken from Hynie's son. "Her public position has always been that she has no objection to a DNA test," Rosen said.

Hynie, who was a backup singer for Brown, and the young son were not included in the singer's will. Brown died Dec. 25 in an Atlanta hospital and his body was placed in a crypt at the home of one of his daughters last month.