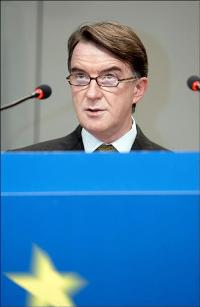 All remaining import quotas and tariffs on goods shipped into the European Union from about 70 poor African, Caribbean and Pacific nations are offered to be removed by the European Commission starting from next January, AP said Wednesday

The commission said the offer covered all products - including farm goods such as beef, dairy products, cereals and all fruit and vegetables - and will take effect through "economic partnership agreements" the EU is negotiating with six African, Caribbean and Pacific regions.

There will be a phase-in period for two major crops many of these countries produce: rice and sugar.

EU Trade Commissioner Peter Mandelson said in a statement the removal of quotas and tariffs will take effect Jan. 1, 2008.

The only exception will be South Africa, where a number of globally competitive products will continue to pay import duties.

"Trade and development for (poor) countries is about much more than just access to the European market," added Mandelson. "But by removing all remaining tariffs and quotas for all African, Caribbean and Pacific countries we will create the best possible opportunities for these economies."

Eliminating all tariffs and import quotas will give African, Caribbean and Pacific countries "the same full access to EU markets" and encourage them to build up regional markets, Mandelson said.

The commission said it is not asking the affected nations to reply in kind.

The EU is negotiating six regional accords with nations in the Caribbean, West Africa, East and Southern Africa, Central Africa, Southern Africa and the Pacific. These will replace the trade chapters of a decades-old trade deal between the EU and about 70 poor nations - mostly former European colonies that grow crops to sell to Europe.

They aim to integrate the latter into the world trading economy by increasing and diversifying their trade. After more than 30 years of preferential access to the EU, countries in Africa, the Caribbean and the Pacific still export just a few basic commodities, the prices for many of which are in long term decline, said Mandelson.