A prosecutor asked a Milan court Monday to reverse the acquittal of former Premier Silvio Berlusconi on corruption charges and sentence him to five years in prison. 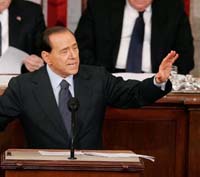 In 2004, a Milan court acquitted Berlusconi of charges he had bribed judges in connection with the sale in the 1980s of the SME state food conglomerate. The three-judge panel cleared him on one count and said the statute of limitations had run out on a second.

Both the prosecutors and Berlusconi's lawyers appealed the ruling.

However, the statute of limitations is expected to take effect before the appeals court gives its verdict.

The next hearing is expected to be held April 20, said Berlusconi's lawyer, Niccolo Ghedini.

The SME case dates back to a decade before media magnate Berlusconi entered politics. Berlusconi was Italy's first sitting premier at risk of conviction on criminal charges.

In 1985, judges blocked the SME sale and ruled in favor of a group of magnates including Berlusconi. But the sale never came off, and the food group was later sold off in parcels, reports AP.

Berlusconi, long plagued by judicial troubles, is on trial in Milan in a separate case, in connection with the purchase of TV rights for U.S. movies by his Mediaset broadcasting empire.

In previous cases, Berlusconi has either been acquitted or seen cases against him dismissed because the statute of limitations had expired. He has always maintained his innocence.