Police arrested a French urban climber who calls himself "Spiderman" as he attempted to scale Malaysia's 88-story Petronas Twin Towers with his bare hands Tuesday for the second time in 10 years. 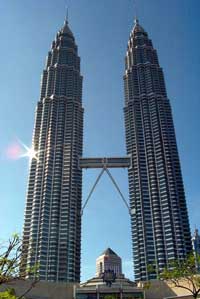 Alain Robert was detained as he made it to the 60th floor of Tower 2, where he unfurled a Malaysian flag to a cheering crowd below before being led away by authorities, Fire Department spokesman Christopher Chong said.

"We asked him to stop, he said OK," Chong said. "He tried to climb further, but we told him no."

A decade ago, Robert was also stopped on the same floor, where there is a ledge for officials to climb onto, and was charged with trespassing.

A crowd of about 500 gathered for his ascent, without ropes and safety equipment, up the 452-meter (1,483-foot) building. He was barely visible once he passed the 40th story.

Visiting French Senate President Christian Poncelet was among the onlookers.

"There are always people who look to distinguish themselves from others, but he (Robert) can do it elsewhere," Poncelet told reporters. "He should respect the laws prevailing in the particular place and the fact that he is trying to attempt this ... it's not safe."

A friend of Robert, who requested anonymity because he did not want to be identified to the authorities, said he had asked for permission to climb the building three weeks earlier to mark the 10th anniversary of his first attempt.

Police cordoned off the area below Tower 2. A fire truck was stationed nearby, and a helicopter circled the tower.

Robert has also climbed the world's tallest building, Taipei 101 in Taiwan, the Eiffel Tower in Paris and the Empire State Building in New York.

Petronas Twin Towers management officials say the outside structure of the towers is not designed to withstand human weight, reports AP.

Police arrested Robert, wearing a yellow shirt with "Petronas" emblazoned on his back, about an hour into his climb.