The Senate Judiciary Committee Thursday cleared the way for subpoenas compelling five Justice Department officials and six of the federal prosecutors they fired to tell the story of a purge of U.S. attorneys that has prompted demands for the ouster of Attorney General Alberto Gonzales. 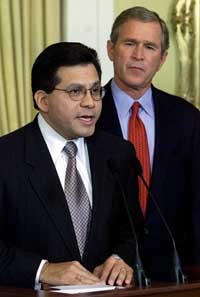 The dispute over the U.S. attorneys has become the latest clash between President George W. Bush's Republican Party and the newly empowered Democratic majority in the U.S. Congress.

Democrats, who have long accused Republicans of running roughshod over opponents, have portrayed the firings as part of a campaign of intimidation and obstruction by the Bush administration and Republican lawmakers.

The voice vote in the committee to authorize the panel to issue subpoenas amounts to insurance against the possibility that Gonzales could retract his permission to let the aides testify voluntarily, or impose strict conditions.

The committee also postponed for a week a vote on whether to authorize subpoenas for Bush's top aides who were involved in the eight firings, including political adviser Karl Rove, former White House Counsel Harriet Miers and deputy White House Counsel William K. Kelley.

Sampson, Gonzales' chief of staff, quit this week. Elston is staff chief to Deputy Attorney General Paul McNulty and Mercer is associate attorney general. Goodling is Gonzales' senior counsel and White House liaison, and Battle is the departing director of the office that oversees all 93 U.S. attorneys.

Gonzales has said he would allow the aides still at the Justice Department to testify voluntarily. It was unclear whether Sampson would agree to tell his story without a subpoena.

The panel also approved subpoena power for six of the eight U.S. attorneys fired since December. The six, all of whom testified last week under oath before the House Committee, are: Carol Lam of California, Bud Cummins of Arkansas, Paul Charlton of Arizona, John McKay of Washington state, Daniel Bogden of Nevada, David Iglesias of New Mexico.

The subpoenas are a warning to the embattled administration to follow through on promises in recent days by Gonzales and Bush to tell the whole story of the firings, beyond the selected details that Associate Deputy Attorney General William Moschella disclosed to the House panel last week.

"I want to obtain their cooperation and all relevant information," Judiciary Committee Chairman Patrick Leahy said. "But I want people to know that if I do not get cooperation, I will subpoena, we will have testimony under oath in this committee. We will find out what happened."

Ranking Republican Arlen Specter said he would do the same thing if he were still chairman, but he cautioned against passing judgment on Gonzales and the aides before the facts are fully known, reports AP.

"I agree that this committee should get to the bottom of this issue," Specter said. "I would hope that we would do so with at least a modicum of objectivity."