For wary conservatives, all eyes on Bush

Every time President George W. Bush makes an overture to Democrats and he makes plenty these days conservative Republicans get edgy. They fear he might be so willing to cross the aisle that he will end up crossing them. 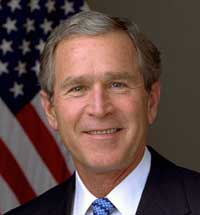 For wary conservatives, all eyes on Bush

"Everybody should be very concerned and very active," said Grover Norquist, president of Americans for Tax Reform and a conservative leader with close White House relations.

"The temptation for an administration in the last two years is to do something for legacy purposes," Norquist said. "And with a Democratic House and Senate, doing something cannot be good."

The White House sees it differently.

Mired in an unpopular war, slumping in the polls and knocked off course by one setback after another, Bush still has time. He can score a few legislative victories and burnish his domestic legacy before he leaves office if he gets help from both parties.

He has little to lose, not having to worry about an election ever again. Now that Bush needs cooperation from Democrats to get things done, bipartisanship is back in style.

"We have suffered as a party from a perception that we're unwilling and unable to get things done," said Ed Gillespie, a former Republican Party chairman. "And so if there are some things that we can do that are consistent with our Republican principles, we should get those things done."

Since Democrats won the House of Representatives and Senate in November, Bush has appealed to them on education, energy, health care, immigration and Social Security. That has kicked up whispers of triangulation, a model linked to his predecessor, Democrat Bill Clinton.

As designed, it amounted to plucking ideas from the opposing party, taking others from the president's own party and offering up a merged strategy that put the White House above the fray. Even when it worked, it often led to both sides feeling scorched.

Karl Rove, Bush's chief political strategist, had been reassuring conservatives that will not happen under this president. The White House mantra is to work with Democrats without abandoning such tenets as low taxes and personal responsibility.

As Rove put it, "We're going to operate around principles and see if we can find a way to bring the broad center together with us." Then he thought about those words and got more precise about the middle ground: "Broad right center."

William Galston, a top domestic policy aide to Clinton, said triangulation was overhyped. In reality, he said, Clinton worked with Republicans on matters such as overhauling welfare a campaign pledge because his views meshed with theirs.

Likewise, Bush may have more in common with Democrats than leaders in his own party on education and immigration.

Bush has not always been in concert with the base that helped get him elected twice. Conservative Republicans have derailed one of his Supreme Court nominations and chided him for expanding government more than he has restrained it.

On cultural issues, such as Bush's opposition to abortion and gay marriage, conservatives are not bracing for a fight. The grumbles tend to focus on two bedrock issues, immigration and taxes.

Bush remains adamant that immigration changes should include a guest worker program and a path to citizenship for illegal immigrants. Many Republicans support that approach; conservatives say it is too lenient toward those who entered the country illegally.

A stalemate does the Republican Party no good. Republican leaders fear their party could splinter in the 2008 election year.

On taxes, the president has put it plainly: "We're not going to raise taxes." But the worries are not going away.

To entice Democrats to negotiate on overhauling Social Security, Bush has offered to meet without ruling anything out. Many conservatives say nothing good can come from that; they do not even want him in the room with Democrats. Their nightmare is a deal in which taxes go up or benefits go down to make the program more solvent, yet without the private investment accounts that Bush wants.

Some of this unrest may be rooted solely in memories of disappointment, Gillespie said.

Bush's father, President George H.W. Bush, famously broke his "read my lips" pledge against raising taxes in a budget deal with Democrats. Republicans had to work to halt President Ronald Reagan's tax deal with Democrats in 1985, led in part by a Wyoming lawmaker named Dick Cheney.

Norquist said the pressure on Bush to give in to Democrats even one time will be immense, reports AP.

Then again, Bush seems inclined to do more than just say no, and he is running out of time.

"The president doesn't have two years," Galston said. "I don't think he has a year. He has about nine months before it's all politics all the time. He has to decide how successful he wants the remainder of his presidency to be."