Angelina Jolie picks up new baby in her international family

Actress Angelina Jolie has picked up the three-year-old Vietnamese boy she plans to adopt, but faces a few last procedural hurdles before she can take him home to the United States, an official said Thursday. 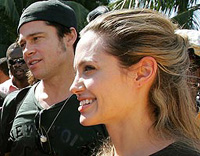 Angelina Jolie picks up new baby in her international family

Vietnamese officials approved the adoption on Thursday, but U.S. officials still need to give the adoption the green light before it is final, said Nguyen Van Trung, director of the Tam Binh orphanage, where Jolie picked up the child at around 9 a.m.

The child must have a medical check-up before U.S. officials can issue him a passport and visa. The procedures could be completed within the next day or two, an adoption official said, speaking on condition of anonymity because he was not authorized to discuss the case.

About 20 minutes after Jolie arrived at the orphanage, someone carried the boy outside to a waiting Toyota minivan with dark windows. Someone shielded the child's face from photographers with an umbrella, and Jolie followed him directly into the car, which then headed into the center of the city.

The same vehicle later arrived at the Department of Justice in Ho Chi Minh City, where Vietnamese adoption officials said a ceremony was conducted at which Jolie officially took possession of the child.

After about half an hour, two vehicles left the building, followed by a buzz of reporters and photographers.

It wasn't immediately clear where they were heading, although some of the security staff who accompanied her to the Justice Department were later seen in the lobby of the Park Hyatt Hotel, where Jolie is staying.

Jolie, who came to Vietnam on Wednesday night, arrived at the orphanage carrying her 5-year-old son Maddox, whom she adopted in neighboring Cambodia in 2002.

Dressed in a black skirt and shirt, the star was preceded at the orphanage by a team of security guards. About 20 children dressed in traditional Vietnamese tunics, called ao dai, welcomed the pair with flowers at the orphanage.

Trung, the orphanage director, said Jolie greeted the boy with a kiss and held him. The child at first seemed shy with his mother-to-be, he said.

"This morning he woke up at 6, just like all the children," Trung said. "He put on new clothes, and he was very excited."

Trung told Jolie that the boy is especially fond of teddy bears and toy cars. When Jolie and the boy left, the orphanage staff and children gave them a round of applause. "It seemed like she was very good at getting along with children," Trung said. If all goes to plan, Jolie could take the child home by the weekend, officials have said.

The boy has been living at the Tam Binh orphanage on the outskirts of Ho Chi Minh City since he was abandoned at a hospital as an infant, according to adoption officials.

Shortly after he arrived at the orphanage, the Tam Binh staff tried unsuccessfully to locate the boy's birth parents.

The boy is healthy and friendly, they said. He gets along well with other children and loves to play soccer. Jolie filed adoption papers as a single parent, because she and her superstar partner Brad Pitt are not married.

They already have three children: Maddox, adopted from Cambodia; 2-year-old Zahara, adopted from Ethiopia; and another daughter, Shiloh, who was born to the couple in May.

The pair made a surprise visit to the Tam Binh orphanage in November last year, when they were spotted cruising around Ho Chi Minh City on a motorbike. Their pictures were splashed across Vietnamese newspapers and magazines.

Pitt did not accompany Jolie and Maddox to Vietnam on this trip.

Vietnam suspended its adoption programs for several years due to concerns that children were being trafficked and exploited. After the government implemented new regulations to address those concerns, the United States and Vietnam signed a new adoption agreement in 2005, the AP says.

Jolie is a goodwill ambassador for the United Nations High Commissioner for Refugees and has traveled extensively to countries in the developing world.

Her 2001 film "Tomb Raider" was filmed in Cambodia, which borders Vietnam. Jolie and Pitt starred together in the 2005 movie "Mr. and Mrs. Smith."