Mexican President Calderon has tough message for US President Bush

Mexican President Felipe Calderon has a tough message for U.S. President George W. Bush: The United States must do more - "much more" - to solve thorny issues of drug-trafficking and immigration. 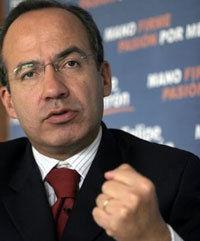 Mexican President Calderon has tough message for US President Bush

At the last stop on his Latin American tour, Bush must convince Calderon on Tuesday that he is committed to soothing strained U.S.-Mexico relations, which got worse when Bush signed a law calling for construction of more than 700 miles (1,130 kilometers) of new fencing along the long border the two countries share.

Many Latin Americans see the fence as evidence that America is ripping up its welcome mat.

The welcome mat here for Bush's talks with Mexico's newly elected leader is muddied with anti-American sentiment, particularly over the war in Iraq.

Security is extremely tight in Merida, a city on Mexico's Yucatan Peninsula. Schools are closed. The area around the hotels where Bush and Calderon are staying is guarded by police and surrounded by metal barriers. Before Bush's arrival Monday evening, about 200 people marched through the streets, carrying Mexican flags and chanting "Bush is a murderer and he's not welcome!"

When he first became president, Bush promised that Latin American would vault to the top of his agenda. But after the Sept. 11, 2001, attacks, the administration's focus was riveted on South Asia and the Middle East. That left many Mexicans feeling neglected by their northern neighbor, and some view Bush's trip as a case of too little, too late.

Bush and Calderon's two days of talks are meant to better the U.S.-Mexico relationship, not yield dramatic announcements. The two have some things in common. Both went to Harvard University in Boston, Massachusetts. Both are conservative and pro-business. Each wants to stem illegal immigration. Yet Calderon has a more studious and less charismatic personality than his predecessor Vincente Fox, who like Bush, owned a ranch.

The two are expected to discuss port security and modernizing customs on both sides of the border to speed trade. Immigration and narcotrafficking - an issue Bush thinks needs to be tackled regionally - likely will dominate their discussions.

Bush's five-nation tour of Latin America is acting as a counterweight to Hugo Chavez, Venezuela's leftist leader who is carrying the flag for the leftward shift in Latin America. The Mexican leader has said he is not interested in being Bush's front man for battling Chavez' rising influence.

Calderon, a conservative who narrowly won the contestedJuly election,is under pressure from a strong leftist opposition to alleviate poverty affecting half of Mexico's citizens, and refrain from being a subordinate to the more powerful United States.

Gerardo Fernandez, a spokesman for Mexico's leftist Democratic Revolution Party, arrived Monday in Merida with a bag of toy soldiers he wanted to leave at Bush's hotel so he could "play war and leave the world alone." When he could not get through security, he climbed a rusty metal barrier and threw the plastic troops into the secured area.

Brazil, Uruguay, Colombia and Guatemala were the first four stops on Bush's trip that began last week. He returns on Wednesday to Washington, reinvigorated to press Democrats and Republicans to overhaul U.S. immigration law. Bush is hoping that a measure will materialize by August - before spending bills begin to crowd the legislative calendar.

The biggest hurdle, Bush said, is figuring out what to do with the 12 million illegal immigrants already in the United States. The president has proposed a guest worker plan that would allow legal employment for foreigners and give some illegals a shot at becoming American citizens. Critics say this rewards unlawful behavior.

"There will not be amnesty, automatic citizenship," Bush said Monday in Guatemala before a short flight to Mexico. "It's just not going to happen. Nor is it feasible to try to kick everybody out of our country. That's not possible. And so I'm going to work with members of both parties to find a rational middle ground."

Calderon has lambasted the U.S. decision to build the new border fence - a mix of physical barriers and high-tech virtual fencing. He likens it to the Berlin Wall, and argues that both countries need to improve Mexico's economy to lessen the desire to seek work in the United States.

Calderon also is critical of the Bush administration's efforts to stem the flow of drugs into the United States. The Mexican president says threats his administration has received from drug traffickers will not stop the government's nearly nationwide military crackdown, and he is calling on the United States to do more to help, the AP says.

"We are, at the end of the day, putting our lives on the line in this battle, and the United States has to come up with something that is more than symbolic gestures, much more," Calderon said in an interview Saturday with The Associated Press.

"Mexico can't diminish the availability of drugs, while the U.S. hasn't reduced its demand. "