The European Union reached a deal on "ambitious and credible" targets to tackle climate change and energy needs, German Chancellor Angela Merkel said Friday after a summit of EU leaders. 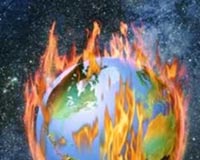 The agreement commits Europe to take the lead in fighting global warming by setting binding targets to cut greenhouse gases and ensure a fifth of the bloc's energy comes from green power sources, such as wind turbines and solar panels.

Controversially, the draft, which was expected to be endorsed by the leaders by the end of Friday's summit, also notes the role nuclear power could play in tackling greenhouse gas emissions.

"This is a new qualitative difference in terms of the whole question of energy sourcing," Merkel said as she announced the plan that would require greenhouse gas emissions to be cut by at least 20 percent from 1990 levels by 2020, and ensure 20 percent of its power comes from renewable energy, a massive hike from the current figure of just over 6 percent.

She said there was still time to reduce the overall increase in global temperatures to below 2 degrees. "We could avoid what could well be human calamity."

"We can say to the rest of the world, Europe is taking the lead, you should join us in fighting climate change," he said.

European leaders hope their commitments will encourage other leading polluters, such as the United States and China, to agree on deep emissions cuts. Merkel planned to present the new EU plans to a June summit of the Group of Eight industrialized nations, reports AP.

British Prime Minister Tony Blair said that, in addition to the EU move, a G-8 agreement on a framework for a global agreement would create "the best chance" of getting the U.S., China and India to tackle climate change.

"These are a set of groundbreaking, bold, ambitious targets for the European Union," he said. "It gives Europe a clear leadership position on this crucial issue facing the world."