A top Iranian nuclear negotiator urged Russia on Friday to ship nuclear fuel this month for a Russian-built power plant, and promised to increase funding for the project after tense talks at which Russian officials complained of insufficient financing. 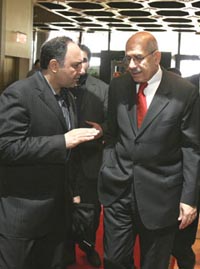 The vice president of the Atomic Energy Organization of Iran, Mohammed Saeedi, said in remarks carried by state-run Vesti-24 television that Tehran was ready to provide more funds to enable the nuclear plant in the Iranian city of Bushehr to be launched in September as planned. He called on Russia to deliver uranium fuel for the plant this month, as earlier agreed.

Saeedi's statement followed two days of talks on a financial dispute over the plant's construction. Russia said last month that Iran in recent months had paid only a fraction of the required monthly payments of US$25 million (EUR19 million) for construction work at the plant, and that the payment delays would push back both the reactor's launch and the uranium fuel deliveries.

Iranian officials rejected the Russian claims that Tehran had failed to meet the payment schedule, and suggested Moscow was caving in to international pressure to take a tougher line on Iran amid the continued standoff over its refusal to halt uranium enrichment activities that some governments say are part of an effort to develop nuclear weapons.

Saeedi's statement Friday appeared to indicate that Iran was ready to make some concessions in order to accelerate the fuel deliveries.

Iran has been eager to get the uranium fuel, but Russian officials said it would only be delivered six months before the plant's launch.

Irina Yesipova, a spokeswoman for Atomstroiexport, the state-run company Russian building the Bushehr plant, told The Associated Press that the two parties would issue a joint statement later Friday.

While Iran emphasizes that it has the legal right to develop an enrichment program to generate nuclear power, the U.N. Security Council which includes Russia has called on Tehran to end enrichment activities because of fears it could misuse the process to produce fissile material for warheads, reports AP.

In Vienna on Thursday, delegates to a 35-nation meeting of the International Atomic Energy Agency approved the suspension of 22 nuclear technical aid projects to Iran as part of U.N. sanctions.