The first regularly scheduled civilian passenger flight since 1999 arrived at Chechnya's main airport in what officials say is yet another sign that normality has returned to the war-wracked Russian region. 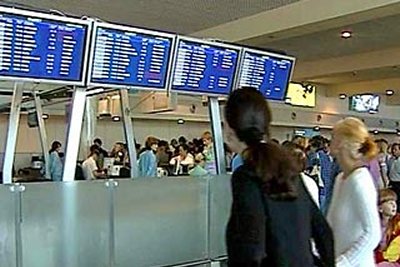 A Tu-134 jet carrying 68 passengers touched down at Grozny's renovated airport just after 1 p.m. (1000 GMT) Thursday, greeted by hundreds of spectators and officials, including Chechen President Ramzan Kadyrov who said he hoped to make the facility an international facility.

Moscow-Grozny round trips will initially run three times a week and could increase to six weekly flights by the summer, officials said. The plane later returned to Moscow.

"A lot has been done in the past several years to revive the republic and return it to peaceful life. But the opening of the airport is of the greatest significance. This is a turning point in people's minds. This means that peace has returned to the republic forever," Kadyrov was quoted by Interfax as saying.

The last civilian flight to fly into or out of Grozny was in March 1999, said a Chechen government official who spoke on condition of anonymity because he was not authorized to speak to the media. Passenger service was halted after masked men boarded a plane departing for Moscow and kidnapped the Russian Interior Ministry's top envoy in the breakaway republic.

Later that year, Russian troops swept back into the region in what became the second of two wars to ravage the republic in less than a decade.

In recent years, large-scale fighting has all but ended in Chechnya as Russian and Chechen allied forces killed several top separatist leaders and co-opted many rebel fighters. Even at the end of 2005, however, the airport in Grozny once the largest in Russia's North Caucasus region was a shattered and decrepit facility, its runways pocked by shell holes and the terminal building blown out.

The Kremlin and the Chechen administration it backs have spent lavishly to renovate the ravaged capital and other towns and hosted concerts, beauty pageants and sporting events to try and show that calm has returned.

Despite the rebuilding efforts and government pronouncements, however, Chechnya remains plagued by widespread unemployment, a battered infrastructure, a large refugee population and rampant kidnappings of civilians that have been blamed on paramilitary forces controlled by Kadyrov, reports AP.

Also Thursday, Kadyrov announced he had nominated Odes Baisultanov, a first deputy prime minister who oversaw the rebuilding of the airport, to be Chechnya's prime minister. Kadyrov held the post of prime minister before Russian President Vladimir Putin tapped him to replace President Aku Alkhanov, who was forced out.