Defending men's doubles champions Jens Eriksen and Martin Lundgaard needed 10 match points Wednesday to close out a victory over Hendri Kurniawan Saputra and Hendra Wijaya in the opening round of the All England Open Championships. 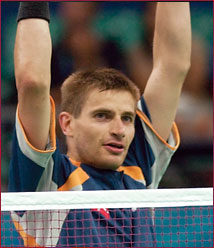 "This can happen with the new scoring system," Lundgaard said. "The other side get the serve and sometimes you can't get back the momentum. It's happened like this before to us."

Later, world and defending champion Lin Dan of China opened his bid for a third All England title against Muhammad Roslin Hashim of Malaysia. Second-seeded Chen Jin of China met Andrew Smith, England's only representative in either singles.