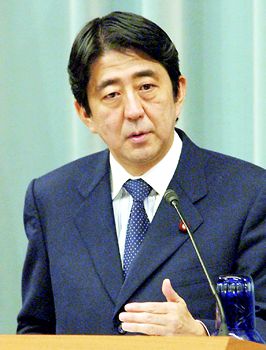 "No matter how desperately the Japanese authorities may try to whitewash the crime-woven past of Japan and cover up the crimes related to the 'comfort women' ... the worst flesh traffic in the 20th century, they are historical facts that Japan can neither sidestep nor deny," the North's Foreign Ministry said in a statement.

The North's harsh rhetoric came a week after Japanese Prime Minister Shinzo Abe said there was no proof that Japan forced Asian women to work in military brothels for its troops in World War II.

Abe's remarks triggered outrage throughout China, South Korea and the Philippines, which say Tokyo has not fully atoned.

Seoul's Foreign Ministry has expressed "strong regret" over the remarks, accusing Tokyo of attempting to gloss over its wartime past.

Abe's comments came as the U.S. House of Representatives considers a resolution urging Japan to formally apologize for its treatment of the comfort women, the AP reports.

Japan acknowledged in the 1990s that its military set up and ran brothels for its troops. In 1993, Japanese government issued an apology in 1993 but it was never approved by parliament.

But Abe said Monday there is no need for Japan to apologize again, and his government made it clear Wednesday that it was sticking to that position.

"The U.S. resolution is not based on objective facts and does not take into consideration the responses that we have taken so far. Therefore, we will not offer a fresh apology," said Chief Cabinet Secretary Yasuhisa Shiozaki.

The resolution does not recommend that Japan pay reparations. It does urge Japan to reject those who say the sexual enslavement never happened and to educate children about the women's experiences.

Historians say about 200,000 women, mostly from Korea and China, served in Japanese military brothels throughout Asia in the 1930s and '40s. Many victims say they were kidnapped and forced into sexual slavery by Japanese troops.