Iran's president will make a rare visit to Saudi Arabia, a major U.S. ally, to hold crucial talks with the Saudi monarch on several key issues of international and regional concern, an Iranian official said Friday. 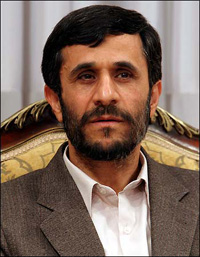 The trip suggests that weeks of talks between envoys from the two countries on the conflicts in Iraq and Lebanon have made some headway.

Relations between Iran and Saudi Arabia declined plummeted since Ahmadinejad's election in 2005. Since then, Arab Gulf countries have offered quiet support for moves against Iran's nuclear program, which, the United States and its allies fear is aimed at creating weapons.

Ahmadinejad will have much to discuss with Abdullah. Violence in Iraq is escalating, Shiite-Sunni tensions are simmering across the Mideast and Lebanon remains tense as the Iranian-baced Hezbollah and its allies try to bring down the Saudi-backed government, the AP reports.

The visit will coincide with the resumption of talks by United Nations Security Council members plus Germany on new round of sanctions against Iran for failing to halt uranium enrichment in accordance with a council demand.

It also precedes a conference of Iraq's neighbors - which Iran and Syria will attend - as well as the United States and Britain in Baghdad on March 10, and an Arab summit in Riyadh at the end of the month.

The U.S.-allied Arab governments in the region are concerned that Shi'ite Muslim Iran is gaining greater influence in Lebanon, the Palestinian territories and Iraq.

According to IRNA, Foreign Minister Manouchehr Mottaki will accompany Ahmadinejad on the during the visit.

The Iranian president returned to Tehran late Thursday night after a visit to Sudan, which is at odds with the international community over violence in Darfur. During the two-day visit, Ahmadinejad expressed solidarity with Sudan and blamed the world's problems on the United States and Israel.

Ahmadinejad last visited Saudi Arabia in Dec. 2005 for a summit meeting of the Organization of the Islamic Conference, which has its headquarters in the kingdom.