Anna Nicole Smith's body will leave for the Bahamas by private plane early Friday and the former model will be buried there hours later, according to the attorney who was given control of her remains after weeks of legal wrangling. 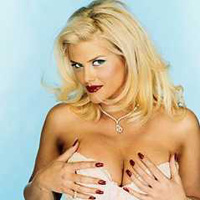 But the funeral might not mean the end of the saga: her estranged mother, Virgie Arthur, will likely try to get the body out of the Bahamas, said her lawyer, Tom Pirtle. He would not give details about possible legal action, the AP says.

"We are not exactly sure what shape it is going to be," Pirtle said Thursday in a telephone interview, just hours after saying Arthur had decided to drop her legal challenges in Florida courts.

On Friday, authorities will escort a hearse before dawn from a medical examiner's office to Miami International Airport for the trip to the Bahamian capital, Nassau, said Richard Milstein, the court-appointed advocate for Smith's 5-month-old daughter Dannielynn.

The funeral will take place later Friday at a Baptist church in Nassau, and Smith will be buried at the Lakeview Memorial Gardens, Milstein said in a statement. Both services are closed to the public.

Milstein did not return phone messages left at his office and on his cell phone seeking additional comment.

Smith's Feb. 8 death in a hotel room at age 39 set off legal disputes in California, Florida and the Bahamas. Her boyfriend, mother and an ex-boyfriend have argued over who should get the body and who should take custody of Dannielynn, who could inherit millions of dollars (euros).

Medical examiner Joshua Perper said he will announce Smith's cause of death next week.

"This was a complex case," Perper said. "It was an unusual case from a medical point of view."

Smith will be buried in a custom-made gown next to her 20-year-old son Daniel following a "over the top" memorial service, according to a friend helping to organize the memorial.

The service, with about 300 guests, will feature large amounts of pink flowers, her favorite color, and music by a well-known singer whose name organizers were not ready to disclose, said the friend, Patrik Simpson, of Beverly Hills, California.

"It will be a very beautiful, Anna Nicole send-off," Simpson said Wednesday night in the Bahamian capital of Nassau. "Of course it will be over the top because it's Anna Nicole."

The burial at Lakeview Memorial Gardens will be much more intimate, with about 30 people, he said.

Ron Rale, an attorney for Smith's boyfriend, Howard K. Stern, would not disclose any funeral information.

Arthur had wanted to bury Smith in her native Texas, and fought last week's ruling from Circuit Judge Larry Seidlin that gave control of the body to Milstein.

But Stern insisted the former Playboy Playmate wanted to be buried next to Daniel, who died of apparent drug-related causes last year. Milstein agreed.

Perper said after the appeals court ruling that he was not sure if Smith's body would be suitable for a viewing. He had told Seidlin during the hearing that she was decomposing.

Perper said embalmers would have to take another look at the body. Stern, Arthur and others have already viewed the body at Perper's office.

Smith married Texas oil tycoon J. Howard Marshall II in 1994 when he was 89 and she was 26. The reality TV star and Playboy Playmate had been fighting his family over his estimated US$500 million fortune since his death in 1995.