Hamas head says group not yet ready to recognize Israel

Hamas' supreme leader said Tuesday that the militant group is not ready to recognize Israel, which has been a key demand of international peace negotiators. 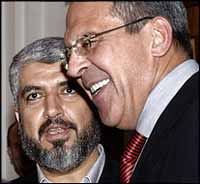 Hamas head says group not yet ready to recognize Israel

"First of all, Israel has to end its occupation of Palestinian territory and put an end to the suffering of the Palestinian people," Khaled Mashaal said when asked about recognition of Israel during a news conference at the close of a trip to Russia.

"When Israel does that, the Palestinian people will make their position clear."

Earlier, Foreign Minister Sergey Lavrov called for international support for the power-sharing arrangement that Hamas and Fatah have worked out and for lifting an international financial aid blockade against the Palestinian Authority.

However, the Quartet of Mideast peace brokers, which includes Russia, has said recognizing Israel is a key condition for resuming aid. It was not immediately clear if Russia's expression of support for the Hamas-Fatah power-sharing agreement meant it was stepping back from the Quartet demands.

Russia favors the agreement between Hamas and the Fatah group to share power because it shows "wisdom, reason and responsibility before the Palestinian people," Lavrov said at the start of his talks with Mashaal.

"We are pushing for all members of the international community to support this process and make it irreversible, including efforts to lift the blockade," Lavrov added.

Millions of dollars (euros) in crucial foreign aid were cut off after Hamas, which the European Union, United States and others consider a terrorist group, gained control of the Cabinet and the legislature in January 2006 elections.

Since the power-sharing deal worked out this month in Saudi Arabia, however, there has appeared to be a softening in the stance of some EU countries toward Hamas. French President Jacques Chirac has said he would ask the EU at a summit in March to support plans for a unity government.

But a spokeswoman for Israeli Prime Minister Ehud Olmert criticized Lavrov's remarks. "This is not the international community's stand and it's not the Quartet's stand," Miri Eisin said.

Mashaal's visit to Moscow reflected the Kremlin's position that negotiations rather than sanctions are the best way to deal with Hamas. Russia, which has been clamoring for a greater role in the Middle East, has been more positive about the unity government plan than Washington and the European Union.

"The Russian leadership supported forming such government from the very start," Lavrov said. "We have consistently backed specific steps which helped make this process successful, and we shall continue acting like that. The Mecca meeting was also important because it opened the way toward the resumption of the peace process between the Palestinians and Israel."

Mashaal thanked Russia for "taking brave steps to host us."

Mashaal was part of the Hamas delegation that visited Moscow in March 2006. The trip irked Israel, which has sought to keep the militant Islamic group isolated.

"We highly value Russia's stance ... in support of the national accord between the Palestinians and lifting of the blockade," he said at the start of his talks with Lavrov, reports AP.