U.S. plans to deploy a missile defense system in Poland and the Czech Republic could hurt Ukraine's relations with its neighbors, the premier's office said Tuesday. 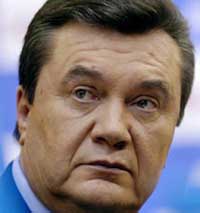 "We believe that deploying a missile defense system in Poland and Czech Republic will not benefit relations between our countries," Prime Minister Viktor Yanukovych told the German newspaper, Handelsblatt, according to his press service.

Washington said in January that it wants to put a radar system in the Czech Republic and a missile interceptor site in Poland plans that have angered Russia.

Some Ukrainian officials have condemned the initiative, saying it poses a threat to Ukraine's security because it could make Ukraine's neighbors targets. Others have asked the United States to provide more details about its plans. U.S. military experts will visit Ukraine in early March to explain them.

Washington says the installations are meant to deal with a potential threat from Iran, but Moscow has rejected the assurances, calling them an effort to strengthen U.S. military might in the region, reports AP.

Ukraine is roughly divided between the Western-oriented western part of the country and the largely Russian-speaking east and south, where people are more sympathetic toward Russia and are deeply skeptical about NATO membership an aspiration of President Viktor Yushchenko, whose efforts to turn the country toward the West have been countered by the more Russia-leaning Yanukovych.