Democrats face a host of risks as they move toward more substantive steps to tie President George W. Bush's hands with funding restrictions on the Iraq war. 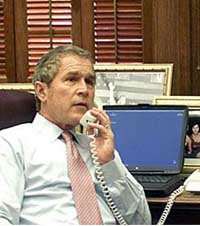 Leaders are wary of allowing the more intense anti-war activists to define the party's image.

Simmering divisions within the ranks over how soon to move and how far to go could quickly diminish a tactical victory this week on a resolution criticizing Bush's conduct of the war.

"There are those in our caucus who would rather we not do anything, and there will be people who want to see us extricate ourselves overnight. We'll have to balance those interests," said Rep. James Clyburn of South Carolina, House Democrats' chief vote-counter. "We're not going to sit anybody out, but we will have to decide how to weigh those things."

Senior House Democrats will huddle next week during a congressional break to plot strategy on their next move, which will be seeking to restrict some of Bush's Iraq war spending by establishing high readiness and equipment targets for troops and requiring those targets be met first.

Rep. John Murtha of Pennsylvania, tasked by Democrats to direct the next step, says his approach "stops the surge, for all intents and purposes," and would "force a redeployment not by taking money away, by redirecting money."

Former Rep. Martin Frost, a Texas Democrat, said Democrats have made a "very clear point" this week by putting the House on record against Bush's troop buildup and now must be careful not to overplay their hand by seeking to cut off funding or limit deployments right away.

"They don't want to be a scapegoat for the Bush administration's failures," Frost said. "This is Bush's war, and there should be no confusion about who's war it is, and Democrats should not set themselves up to have that done to them."

Frost said he did not want to "prejudge" Murtha's effort to restrict funds, but cautioned that Democrats should not yield to intense pressure by outside anti-war groups for swift action to end the conflict.

Democratic leaders "will have to decide how to deal with the anti-war groups in the months ahead," Frost said.

Murtha's effort appears crafted to hamper Bush's strategy without opening Democrats to the charge that their party is abandoning troops in harm's way.

That could be a difficult argument to make, however, some analysts say, given that Bush and Republicans are determined to paint Democrats as eager to choke off funding.

"The first step was the easy one. The real puzzle is the next step," said William Galston, a former Clinton administration aide. "A straight up-or-down funding discussion is a loser for Democrats, and if they're smart, they will not allow the issue to be posed in that way."

Privately, some Republicans concede that Democrats have a chance to tie Bush's hands without paying a political price if they carefully handle an upcoming debate on the president's request for nearly $100 billion (Ђ76.1 billion) in additional money for the wars in Iraq and Afghanistan. Republicans would be hard-pressed to reject measures that shift funds or place conditions on spending, such as those envisioned by Murtha, they said.

"As long as (Democrats) can tamp down on the Kuciniches of the world and they are modest in what they try to do, they can hit it out of the park," said one former senior House Republican aide, referring to peacenik Rep. Dennis Kucinich, an Ohio Democrat, reports AP.

Still, the small but vocal band of lawmakers led by Kucinich who are pushing for an immediate cutoff of war funding and withdrawal of troops could pose a problem. Democrats could suffer politically if the party is perceived by the public as being too quick to pull the plug on the mission.

A survey conducted Feb. 7-11 by the Pew Research Center for the People and the Press shows that while a majority of Democrats support cutting off money for the troop increase, most independent voters and a majority of the general public do not.

The poll showed support for the war continuing to slip, and a growing sentiment for bringing troops home, but found that most believe the withdrawal should be gradual.

Democrats face risks at the other extreme, too. Many of their more moderate members are wary of doing anything that would affect troop funding. Republican officials say they are already planning to target vulnerable House Democrats who go back on campaign pledges not to cut war spending.