Some of Hollywood's most famous stars are getting facelifts before the Academy Awards. 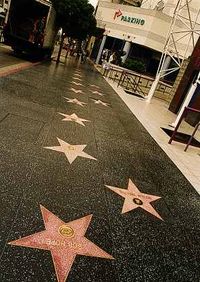 Workers have been busy fixing broken sidewalk stars and cracked terrazzo on the Hollywood Walk of Fame in front of the Kodak Theatre, where the glitzy Oscar ceremony will be held Feb. 25.

"We wanted it to look good for the Academy Awards," said Hollywood honorary mayor Johnny Grant, who leads the Hollywood Historic Trust that operates the Walk of Fame.

Hollywood officials believe the buckling was caused by a Metro subway line, which has a station beneath the Hollywood & Highland center that houses the theater. Transportation officials say it's the sun, suggesting damaging "thermo-expansion" occurs when sunlight heats the black terrazzo.

The $80,000 (EUR61,581) in repair work is viewed as a test project that could also determine the true cause of the buckling. The city has been investigating the problem since 2002, reports AP.

About 121 damaged terrazzo squares, plus 16 others with stars in them, are being replaced. Workers are experimenting with a concrete base up to 8 inches (20 centimeters) thick to hold the new squares in place. The buckling sidewalk's base is about 3 inches (7.6 centimeters) thick.

On Thursday, as crews worked on the famous boulevard, Hollywood officials announced it was boosting the price to sponsor a new star by more than 40 percent to $25,000 (EUR19,244) to pay for future Walk of Fame repairs. The walk has more than 2,320 stars.

The cost of the latest repairs was being divvied up among the historic trust, the city, the shopping center and the Metropolitan Transportation Authority.